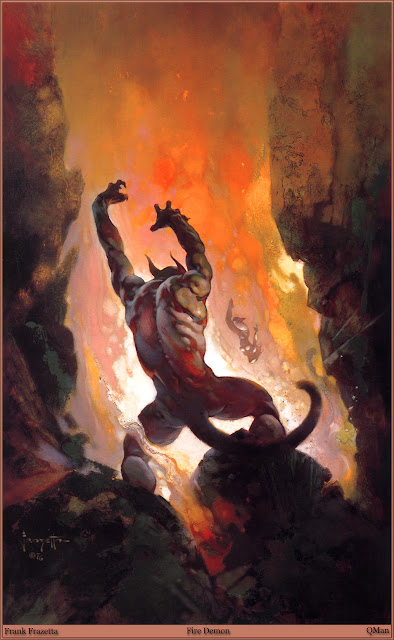 Who doesn't like a good demon (well, not good - you know what I mean). Today, I present six delightful demons that have fallen prey to the bindings of earthbound conjurers.

Izaph is a type I demon that once stalked the woodlands around an ancient castle that was inhabited by a coven of diabolists. The villages that bordered the woods were beset for many years by the temptations and depredations of Izalph, and many a knight and maiden were cast into ruin by the demon's actions. Finally, a trio of spellcasters, a cleric, druid and magic-user, joined forces to deal with the infamous 'Demon of the Wood'. The trio found a grove of ancient oak trees and carved runes of power into them. They then drew lots. The cleric lost and served as bait for the demon, fleeing from it and drawing it into an especially large, ancient oak tree. As the demon followed the cleric into the tree, the magic-user and druid completed their spellwork and activated their magic circle, binding the demon into the tree. The cleric, alas, lost his life. Izalph is still trapped in the great oak, brooding and cursing his fate. Seven dryads dwell in the smaller oaks that serve as the anchors of the magic circle, and they delight in tormenting the captive demon.

Phimzael is a type II demon that looks like an especially large, warty, frog with bilious green flesh streaked with gold. For many long years, the wizard Yurk researched Phimzael, learning his true name and the symbols required to conjure and hold him. Yurk desired a very ancient spell involving transportation to and from the gem-like worlds that dot the Firmament, and his inquiries convinced him that the Celestial Circle, a band of magic-users known in ancient Irem, had been the last to perfect this spell, and that they had had contact with Phimzael. Yurk also knew that Phimzael was not to be trifled with. He constructed a long shaft, like a well, with a circular room at the bottom. Here, he drew his magic circle and, accompanied by his apprentices, conjured the demon. Phimzael was a cunning opponent, and time and time again he fed Yurk false information about the spell he sought. Eventually, he corrupted Yurk's most promising apprentice and, during an especially long and frustrating audience with the demon, the apprentice stabbed Yurk in the back (literally) and released Phimzael from the magic circle. It was then that Phimzael learned just how canny Yurk was, for the rim of the shaft also formed a magic circle, more powerful than the first and obscured by illusions. Phimzael was again trapped in a magic circle, and this time there was nobody capable of releasing him. In a fit of anger he slew the apprentices and consumed their souls. He still sits at the bottom of the shaft, which is now filled with water, in the ruins of Yurk's manse.

Zuron was a type III demon that specialized in providing engineering knowledge to those who conjured and commanded him. It was in this capacity that was conjured by the archimage Thebea to advise the gnomish engineer Walprict in the crafting of an especially large and impressive iron golem. Unfortunately, dealings with demons are never easy, and Zuron proved to be more than Thebea could handle. She arrived in her laboratory one morning to find that Walprict had killed himself in an especially macabre fashion, and that Zuron was free of his magic circle. Thebea had prepared for this, though, and grabbing the only item handy, a bronze cog, pronounced a powerful spell that trapped Zuron within the cog. She hid the cog away and, in the course of many years, was killed on an adventure. Her manse fell into disuse and ruin, and one day became the target of locals, who scavenged the ruins for building materials. It was in this way that a scrounger came across the cog and other mechanical items, and traded them to a clockmaker in a far away city, who used the parts to fashion a wondrous clock tower, in which each day a parade of automatons would act out various acts of knightly valor when the clock struck noon. The demon cog, however, corrupted this machine. If it can spill the blood of three innocents, Thebea's ancient spell can be broken and Zuron released. The demon clock has already claimed one victim, a workman who was cleaning the mechanism when he was struck by the sword of one of the clockwork automatons.

Rahorezs was a rather grandiose and gluttonous pig of a type IV demon who was brought into the fabric of the material plane by the renowned demonologist Praction as a wedding gift for his beloved, Halia Rathsdottir, scion of a family that claimed descent from the rebel angels. The demon was conjured into a tapestry, his depiction fixed there with a magical golden thread. The demon could still communicate from the tapestry, but was otherwise powerless. Still, communication was enough, as Praction and Halia found themselves slowly giving way to gluttony themselves. In time, their inexhaustible appetites drove their subjects to revolt, and the two, despite Praction's power, were destroyed. Rahorezs had hoped a revolt would result in the tapestry being burned or otherwise destroyed, thus releasing him. Unfortunately, it was merely looted and has been handed down through several owners, always bringing upon them the same curse that finally destroyed the demonologist and his bride.

The demoness Saherael, a type V demon, fought in the epic Battle of Borok's Grave, where 20,000 demons and devils, manipulated by the demodands, destroyed themselves in a quest to claim an artifact that did not exist. Neither side tells of the incident today, of course, but the damage was done. Saherael was not killed in the battle, but she was gravely wounded and weakened, and in this state was captured by a coven of witches loyal to Baalzebul. The witches held and tormented the demon for nine long months before finally tearing her, body and soul, apart. Her body they threw to their devil swine, but her soul they captured in six small rubies, each a piece of a larger gemstone. These rubies they set in the hilts of six magic swords that now thirst to be united so that Saherael can reform in the Underworld and seek vengeance on the souls of those who wronged her.  The Six Swords of Saherael are as follows:

+1 Greatsword, bearer can summon one marilith 1/day with a 20% chance of success

+1 Longsword, grants bearer a +4 bonus to save vs. spells

Each of the swords is intelligent and chaotic (CE), and yearns to be re-united with its siblings. All six will fill the heads of their owners with the notion that all six swords united will grant a single wish (which is actually true, as they will allow Saherael's fondest wish to come true). Assume each sword has an Ego of 6 and can speak and communicate telepathically. They all have 120-ft darkvision.

Currently, the longsword is in the possession of Sir Galt, a formerly shining knight in the process of becoming a chaotic warlord. The scimitar and bastard sword are in the vault of a king, and cry out constantly for their sisters. The other three are scattered about in various dungeons, seeking new pawns to carry them to their ultimate desire.

Dosoharh is a type VI demon that has tired of immortality. He seeks ultimate release from existence, and can only achieve this by being slain in the depths of Hell. Dramatic to the end, he has concocted a grandiose quest involving three (three!) virginal maidens, a silver chalice that holds the preserved eyes of six of the world's greatest diviners, a down-on-its-luck red dragon called Jorvax the Bloody, the comedy stylings of Thobad (a renowned jester of Yex) and a cast of thousands. Powerful adventurers encountering any of these people or things might take up a thread of this plot and follow it into Hell, where Dosaharh awaits his fate impatiently. What those adventurers will not know is that Dosoharh is a manic depressive, and he's just about ready to go from the blackest sadness to joy unrestrained (and joy in a demon is a terrible, terrible thing).

Posted by John Matthew Stater at 9:35 AM