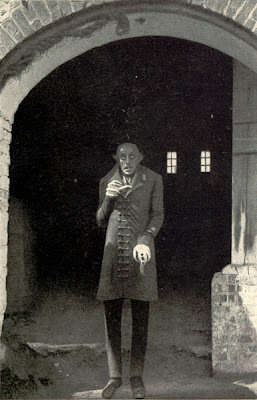 Today, I introduce you to six vile vampires who stalk the streets of Nod, or your own campaign. Note, for Blood & Treasure players and TK's - I'm varying the Hit Dice of these vamps - feel free to do the same in your games.

Typhus is a small man, both in terms of physique and spirit. A peddler of tin items he hammered himself, he was bitten one night as he cut through an alley on the way home, hoping to avoid the city guard. Buried* in a pauper's cemetery in a cheap coffin, he soon arose from his grave and place several of the city's beggars under his control. With their help, he exhumed his coffin and secreted it in a cave just outside the city. Here, he has become something of a pack rat, hoarding baubles that he steals from the luminaries of the city and feasting on drunks who have fallen asleep in alleys, so as not to alert the authorities of his presence.

Viliann the Bat was a simple tavern wench in life, a tavern wench subjected to much unwanted attention because of her bonny looks, and subjected to an especially unwanted attack one night in the wine cellar of her tavern by a vampire. Viliann was buried in a simple ceremony in a graveyard just outside town and rose as a vampire in her own right one week later. She now haunts the city as an avenger in a dark, hooded cloak, destroying the undead when she can and preying only on men of an evil disposition. She has only once created a spawn herself, and came to regret it. She keep's that spawn's head in a box in her cramped hiding place (in the sewers of the city) as a reminder of her mistake. Viliann appears as a beautiful woman of about 18 years, with spooky eyes and jet black hair. 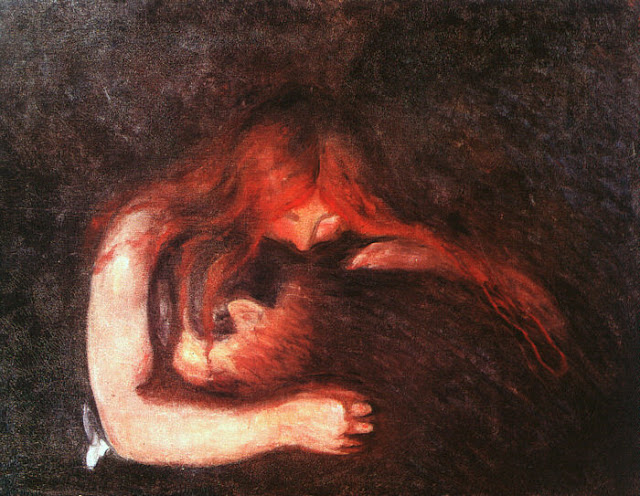 Alaron was a sage in life, and an easy target for a visiting vampire. Killed one night after he invited a stranger in for a late consultation, the sage's body was hidden in a trunk, which now serves as his coffin. Most folk never noticed when the man stopped leaving his home in the daytime, and he still makes himself available for consultations at night. Alaron is fairly selective about whose blood he consumes, preferring the blood of noble students, but taking just enough to sate his thirst and not rouse suspicions. He has managed to enthrall several of the apprentice mages in the city, and uses them to spy on their masters. He carries a hope that a spell or formula might one day appear that can reverse his curse.

Dallach the cat is a wanderer, settling in a city long enough to hunt down the most powerful game and then moving on. He usually finds a lonely place to hide his coffin near a city, and then spends about a week in the city sizing up the possible prey - if adventurers are not present, he usually focuses on the local lord, captain of the guard or parish priest. Dallach appears as a tall, ruggedly handsome man with pale, green eyes and long, platinum blond hair tied in a tail. He dresses well, but not too well, and carries a sword and dagger on his belt.

Mithlo was an itinerant minstrel in life, roaming a large region and stopping for a week or two at different road houses and taverns to entertain before moving on. A handsome lad, he was always popular with the local females, but was careful not to overstay his welcome with the local men. On one of his nocturnal travels to woo the daughter of a local lord, he was taken by a vampire and left in the woods, his body stuffed in a hollow log in a gully. A few days later, he awoke as a vampire, the log serving as his "coffin". His looks, alas, did not survive his death completely intact, as some rotting had set in. He now continues to roam the same region, using his music (he has the musical and spell casting abilities of a 7th level bard) to serenade women at night and lure them to their death. Mithlo has created several spawn, who sometimes gather for moonlight revels around his coffin. His finest conquest was the Lady Bethony, who serves him willingly in hopes of achieving eternal life.

Lothic was an adventuring fighter who made the greatest mistake of his life when he delved into a haunted ruin in the mountains and drank from a magical fountain. Killed by the blood red wine of the fountain and turned, his already chaotic nature drove him to hunt down his former companions and establish himself in the ruin as a petty robber baron. Soon, he gathered a small army of outlaws to him, and now he preys on the nearby villages and towns, plundering them and seizing women for his vampire harem. Lothic is known for his wolf-skin cape, crimson plate armor and two-handed axe. 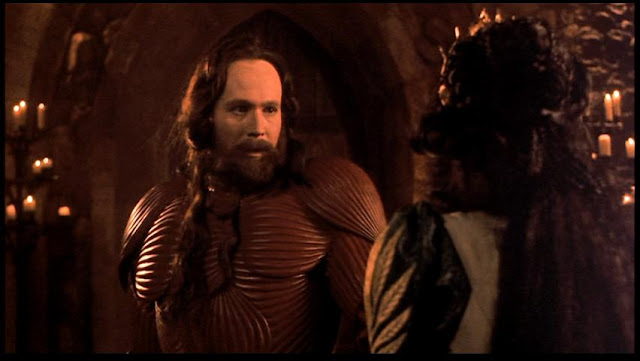 * This just occurred to me: In games and fiction (especially modern fiction), we often see people bitten and drained and turned into vampires right on the spot. But part of the vampire mythos is that they must return to their coffin in dawn - so wouldn't these insta-vamps be toast the next day (or, at least in game terms, be unable to regenerate/heal) if they had never had a coffin in the first place? I think it would make more sense to allow the person to die, be buried, and then begin appearing as a vampire - maybe give it a few days. This might make for more atmosphere, as the person's friends and family would never be sure unless they cut off the corpse's head or took some other precautions. Just a thought.
Posted by John Matthew Stater at 11:06 AM