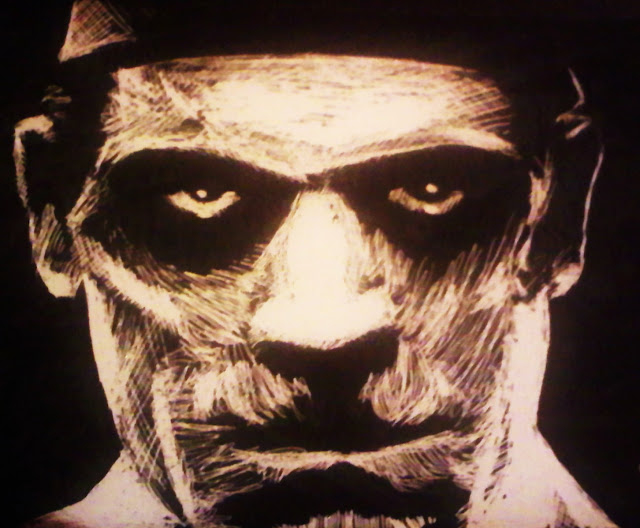 Mummies are a natural monster for fantasy games due to their lineage in horror movies (good and bad). The traditional mummy is Egyptian (or faux-Egyptian), but that need not be the case ...

Brost was a trader 300 years ago who plied the high mountains, carrying silver ornaments down from the bat-headed people to the towns and villages in the green valleys far below. It so happened one day that Brost made a serious miscalculation with the daughter of a local lord with a well known lack of temper, and he found it necessary to make an unscheduled trip into the mountains. Winter had already come to the valley, and the mountain passes were exceptionally dangerous when he set out, and alas, one misstep was all it took to end Brost's life. He lie in a crevasse that was soon filled with snow and ice, preserving his body while a taste for revenge preserved his spirit (in a fashion). The next year, Brost rose from his icy tomb and closed the pass to traffic, defying the petty priests of the valley and cutting the people of the valley off from civilization. He demands single combat with the lord who chased him out of the valley, and will not rest until he has gotten it.

Unlike most mummies, Brost's touch does not cause disease. Rather, it is an icy grip that drains a person of 1 point of dexterity per round (or 1 point of AC if the victim has no known dexterity score). This dexterity damage cannot be healed normally; healing first requires the curse of the ice man to be removed.

Adana was a sneak thief who operated in a northern town, using her charm and nimble fingers to relieve visiting merchants and sailors of their worldly goods, and, on occasion, their lives. Finally caught by the duke's soldiers, she was tried and hung, her body thrown into a bog. Thirty years later, the slow process of "bog mummification" was finished, and her tormented spirit, which had long roamed the bog as a will-o-wisp, settled back into its old home. She now haunts the wilderness as an undead robber, casting aside coins in favor of jewelry to adorn her black, leather hide. She currently wears a golden torc (worth 200 gp), several bronze bracelets (worth a total of 30 gp) and a golden anklet (worth 300 gp), plus whatever random jewelry you might roll for her.

Unlike most mummies, Adana's touch does not cause disease Rather, it delivers acid damage that deals 1 point of damage per minute until a remove curse spell is cast to counter it. A delay poison spell halts the acid damage for a time, as does submersion in bog water.

Titena was the slave and close confidant of a high priest of Seth. She served her master loyally for many years, tending his every need, always desirous of one day being freed. It finally passed that an assassin found his mark, and the high priest was killed. His acolytes quickly swept up his servants and animals and slayed them that they might be mummified so that they could serve their master again in the afterlife. So it was that Titena, filled with wrath, was made a mummy and sealed in the crypt of the high priest. Whether the others made the journey to the other world is unknown, for she awoke as a mummy, alone and consumed with hatred. She quickly defiled her master's body and now waits for release from her seemingly eternal prison. She has a single gem of true seeing lodged in her forehead.

Vadun was a monk and mathematician who underwent the process of living mummification (a strict dietary regimen, exercise and poisoning) that he might be preserved for all time. After death, he was sealed into an alcove with bricks, to be unsealed three years later. Unfortunately, between his death and his appointed time of release, the monastery was sacked, its monks killed, its treasures carried away. Vadun now remains a prisoner in the monastery, his staggering intellect bent on taking revenge on the world for his humiliation.

Unlike most mummies, Vadun does not spread disease with his touch. Rather, his touch is poisonous (per poison III). Damage from this poison can only be healed after a remove curse spell has been received by the victim.

Zuranthula was a powerful warlord among the Kith-Yin. After death, he was mummified by his followers, that he might continue to lead them on their raids in the Astral Plane. Unfortunately, before he could awake, his people were attacked by their rivals. Zuranthula's sarcophagus was cast out into Astral Space to float for eternity. It would have done just that, but the conjuring of a curious wizard brought it into the Material Plane. Surprised by the contents, the wizard was soon killed, and Zuranthula, now crazed, began haunting the wizard's dungeon complex, still seeking a return to the Astral Plane.

Castillos was a very wicked man, though his wickedness was subtle. Most folk considered him a rather dashing figure, fairly honest, and good company. His squire, Manuel, knew better. He had seen him dally with the affections of many women, and when Castillos dared turn his eye upon Manuel's own lady love, Castillos' fate was sealed. On one night, after a drunken revel, Manuel led his master into a dank catacomb, ostensibly in search of a cache of elven wine he had heard tell of. In truth, he clubbed his master over the head and bricked him into a chamber, his body sealed inside a cask of wine. Castillos died there, but the alcohol preserved him, and now he seeks Manuel, who inherited his estate.

Unlike most mummies, Castillos does not spread disease with his touch. Rather, his touch brings on a sort of manic drunkenness (per the hideous laughter) spell.