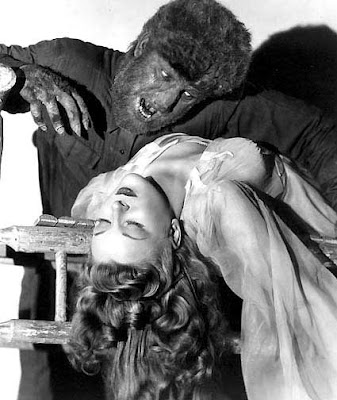 We round out the "6 Monsters" series with six lycanthropes that might be lurking about the next city or dark wood your PCs visit.

Emma Scholt is a fierce woman, with a grave countenance and nary a sign of joy or lightness in her. A librarian, she is a pinnacle of order and reason, relied upon by the traveling sages and professors of Hogyth College for their research. Her staff fear more than respect her, for they have had occasion to see the mask slip every so slightly, to see the blood rise to her face and the rage within bubble to the surface even momentarily when something was found out of place or improperly handled. She keeps her office in the sub-level of the old church-come-library at the college, within the confines of the forbidden section, where heretical and valuable texts are locked away behind an iron door. Here, she prowls when the moon is full and she has taken on the aspect of the wolf (after making sure the volumes here are safely locked behind iron bars and away from her more destructive impulses.) It was two summers ago that one of her staff, a dashing fellow from the north, crept into the forbidden section in a bid to woo the librarian, for he had seen her flush with anger and was captivated by the beauty that anger revealed. Of course, he never left the forbidden section, and what remained of him the next day was hidden away to be a nagging worry in the back of Emma's mind that, one day, he will be discovered and she will have to flee.

The docks of Sampthr are a wild place, sitting as they do at "the end of the world", where the northern lights adle the brain and the bitter cold drives men and women to all manner of extremes to survive. The docks will be an even wilder place soon, for a werewolf has been introduced to the mix. Hemix was a sailor from a far away land who was traveling north, to the empty, snowy quarters there that he might quit humanity and live out his curse in relative peace. Alas, an accident aboard the ship that was carrying him left him unconscious and with amnesia. Recovering on the icy streets of Sampthr, he spent a week regaining his strength under the ministrations of a tavern girl named Muirion, who liked the look of him. A strong lad, he soon found work on the docks and has taken up with the girl, blissfully unaware that in just two days, when the moon is full, his true nature will reveal itself.

Talyn was a soldier of Rurit who was captured during a fierce battle with the Duwoldi Empire. He and his fellows were gathered up, bound in chains, and sold off to Rolla the Slave Trader, who in turn sold Talyn and a few others to work on the villa of Chazadar, a spice merchant who had made a name for himself in Duwoldi politics. A mercenary, his fellow soldiers knew little about him, and they have learned little since. Talyn is a werewolf, and though he was at first loathe to be a slave, he has since found it excellent cover for his disease. Hunting his fellow slaves is like shooting fish in a barrel, and he has set his eyes on Chazadar's wife. At the next full moon, he will creep into his "master's" villa, slaughter the household and bite the beautiful Latzme, infecting her and making her his mate.

Minri
Minri is a girl of about 12 years who lives on the rough and tumble streets of Tricardis. One of many street urchins, she makes her way as a beggar and thief, leading (from behind) a large gang of urchins. They dwell in a number of abandoned buildings or beneath bridges or in the sewers, picking pockets during the day and sometimes carrying off more ambitious heists at night. When the moon is full, Minri takes on her rat nature and infects the new members of the gang with lycanthropy. Those who survive become full fledged "street rats", and are brought to the gang's sanctum sanctorum in an abandoned and forgotten dungeon beneath one of the city's old watch towers, where they feast and dance and dream of conquest.

Samera is a princess, regal and cruel, who rules over a small principality on the shores of a great, inland sea. Her land of rugged hills and tangled woods is known for its horses and its blue-furred tigers. Samera is a strong ruler who has had many consorts, but has not yet been wed. Her family is tight-knit, and the house servants fear them, for they are casually cruel and seem not to have a drop of human kindness in them. When the moon is full, the servants are dismissed from the house and the family perform rituals and sacrifices to the moon goddess to ensure their country remains fertile and strong - or so they say. It is also during these revels that the blue tigers of the hills become exceptionally aggressive, attacking not only livestock, but people (usually hapless travelers) who wander out of doors at night.

Yao is a wandering peddler of boar bristle brushes and other odds-and-ends he scavenges on his travels. He travels on foot, visiting the villages and towns between the eastern hills and the tranquil sea, his fat, red face well known in the region. Most folk are suspicious of the man, who never sleeps a night in a civilized village, always preferring to camp a mile or so away. His products are good enough, and he doesn't cheat folks, but he tends to stare with his piggish little eyes, and one gets the feeling he is sizing them up for a meal. He is, of course, a wereboar. An intelligent man, he makes sure to get himself far away from civilization when the moon is nearing full, only rarely allowing himself the luxury of killing a human being, and only then when that person has cheated or offended him in some way. Travelers might encounter him in the wilderness, where they will find him evasive and hostile if they are kind to him, and uncomfortably pleasant if they are unkind.

Image found at Brian's Drive-In Theatre
Posted by John Matthew Stater at 8:49 AM