It's a Nice Day for a White Wizard [ACTION X] 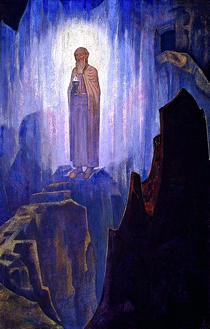 Yeah, I should probably be shot for that title.

So, a couple days ago I posted a spell list for "black magicians" that was based on the supposed powers that the demons in De Plancy's Infernal Dictionary could bestow upon a conjurer. In ACTION X, these magic-users, officially called black magicians or conjurers, are Charisma-based spellcasters, meaning they will make a charisma-based task check to cast spells.

The flip side of these folks are the white magicians, or theurgists, who are Wisdom-based. Same rules for spellcasting, but a different key ability and a different spell list. For the white magicians, I decided to delve primarily into reputed miracles, both from the Old and New Testaments in the Bible, and from what I could glean from the lives of the saints and a few notions tucked in from the druids. If you were running a campaign with somewhat Biblical clerics, you might find this list useful. I think it's a pretty fun mix of God's mercy and God's wrath, and isn't completely foreign to what is expected from a fantasy cleric.

Bilocation - A trick of the saints and apparently noted in psychic phenomena, this is the ability to be in two places at once. I aim to make this a non-combat spell - the point would be to allow the magician to simultaneously accomplish two tasks.

Buoyancy - There is a tale of a miracle that involved making a metal object dropped into a river float to the surface.

Create Golem - A clay golem, to be precise.

Multiply Food & Water - This is based, obviously, on the loaves and fishes episode.

Sustenance - This would allow the magician to go without food and drink (and maybe sleep) without suffering any negative consequences.

Transmute Matter - In the Black Magic post, I mentioned Transmute Metal and Transmute Liquid. Since spells in ACTION X are not prepared ahead of time, creating scarcity and thus more challenging game play by multiplying the number of spells, it seems to me I might as well combine those spells into a Transmute Matter spell.

Turn Undead - Yes, in ACTION X it's a spell.

Now, if we have charismatic Conjurers and wise Theurgists, who uses intelligence? Well, besides the non-magical brainiacs and hackers, it's the psions of course. I'll post the psion power list in a couple days.


Posted by John Matthew Stater at 8:44 AM