By gum, I'm busier than a one-armed paper hanger lately. Here's the Blackpoort post I promised yesterday - I got busy writing Lyonesse and forgot to post. Enjoy. 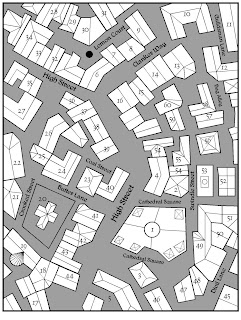 Crooked Street (often just called “The Crook”) is a lively street of bustling crowds, where rich and poor mingle. The center of activity on The Crook is the Music Hall [18], of course, and the old street has become a center of the “Bohemian” art set in Blackpoort, drawing jongleurs, prostitutes, street artists, minstrels and clowns at twilight and lasting into the night.

17. Brigtan the Assassin: Brigtan is a young woman of modest means who makes a living as a duelist. Aloof and scheming, she appears to have been educated somewhere, but never speaks of her past. Her home is a single-story brick building with a slate roof and a conservatory in which she raises a number of “medicinal” herbs. Hidden beneath the conservatory, under a removable floor tile, is a small coffer holding 450 pp and a large, leather-bound bestiary. Brigtan is very short, with tanned skin, blond hair that always seems to be falling in her face, and hazel eyes. She is always dressed neatly, in a black doublet (actually a jack of plates) and black breeches, with an ornate longsword on her hip and daggers hidden in her tall boots.

18. Music Hall: Always surrounded by hustle and bustle, the music hall is the center of the Crook's cultural life. Owned by Leona Tattlewit, a young woman with alabaster skin, dark brown hair cut in a bob and aloof chestnut eyes with a touch of crimson. Tattlewit is tall and thin, graceful and with an airy, sylph-like beauty that belies her very precise and business-like mind. Her former husband, Sceath Tattlewit (RIP) was a well regarded actor, and she inherited the theater when he died. The music hall plays two-penny (well, 2 sp) operas to boisterous, noisy crowds. Halflings work the audience selling greasy viands and fruit and picking pockets (Leona gets 20%). The hall is a building of red bricks painted in bright, garish colors (blue, yellow, purple) and an old copper roof that leaks. Next week, they are putting on a musical production of a new play called The King in Yellow.

19. Foundryman's Club: This dimly lit social club is frequented by laborers of all stripes in Blackpoort, including poor adventurers. The club consists of a single story brick building with a tall, peaked, slate roof and a long, brick chimney. Inside, there is a common room with three round tables (old oak, varnished by several generations of use), four long tables painted red and a few semi-private booths hidden by lank, greasy curtains. The inn is run by Wolvine, a youthful woman with olive skin, thick, blond hair pulled back in a bun and hazel eyes always cast down in a serious look. Wolvine is a bit heavy-set, and usually wears a peasant dress. She inherited the club from her father, Olvus. The club serves black beer and pungent mead in wooden goblets. Steaming trenchers of eel and white fish are set on the tables every hour, and patrons are expected to drop a few coppers on the trencher after eating their fill. Wolvine, despite her surly exterior, is brave and virtuous. A widower who lost her husband, a man-at-arms, to some damn fool dungeon exploration, treats her patrons like her own children, doing her best to keep them on the straight and narrow and true to their lives and children.

20. The Old Miser: This imposing five story tower is the home of Nevenbak, a wealthy miser. Nevenbak's home, though once quite grand, has fallen into disrepair. The stone is black with soot and the roof is missing slate tiles. The corners of the roof were once protected by sculptures of eagles, but all but two of them have long since fallen into the overgrown garden. The garden is surrounded by a tall wall with a tarnished bronze gate. Nevenbak lives alone, having long ago driven away friends and family with his over zealous thrift and inhuman lust for money. He maintains a vault beneath his house that has yet to be cracked by the thieves of Blackpoort, though many have tried. Their remains now decorate the vault's antechamber, where dwells a captive owlbear, possibly Nevenbak's only remaining friend. Nevenbak spends his days in his counting house in the southern portion of Blackpoort, and his nights in the vault with his owlbear, counting his money (the horde now amounts to XXX and a potion of green dragon control in a dusty wine bottle. One of Nevenbak's arms is twisted, the hand atrophied into a hook-like claw.

21. Madhouse: Blackpoorters usually hurry past this somber, three-story building. Once a manor belonging to the extinct Usher family, the building is now a madhouse under the supervision of the priests of Mercurius, specifically Brother Candle, a well curtal friar with sun-kissed, happy wrinkles framing his eyes and light brown, tonsured hair. Candle's own mother went mad, so he has dedicated himself to caring for the insane and using what few powers he has to keeping them healthy. The other priests who work in the madhouse consider it a punishment, which is usually is, and often react accordingly to the needs of the inmates. It is also known to be a place where enemies of high placed men and women end up, often without the knowledge of Brother Candle. The windows of the madhouse have thick curtains of black velvet, used to keep the moonlight and its mind-bending power from worsening the condition of the mooncalves, lunatics and melancholics interred within.
Posted by John Matthew Stater at 7:27 PM