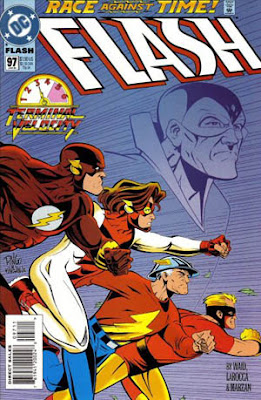 I've mentioned before that the trick of writing a super heroic RPG is dealing with scale. Whatever system you use has to be able to handle 98 lb weaklings and guys who can bench press locomotives, and it needs to do so in such a way that the two can adventure together - i.e. you have to part ways with reality a bit to make it all work.

If scaling Strength in a comic book hero game is hard to do, scaling speed is just as hard. Again, you need to have a system that accommodates normal (even slow) human beings and folks who can zip around at the speed of light, and you need to integrate speed with the other rules systems to make super speed meaningful, but not overpowering.

My initial idea was to use the traditional movement rate concepts from old school games, but expressed in yards or meters per minute. Thus, a movement rate of 100 became standard. The problem, of course, was that cars, for example, would have a normal movement of about 900, and other vehicles higher than that. That means super speedsters would have the same speed advantages. With most of the action in a comic book hero game taking place in fairly confined quarters, speeds of 900+ don't have much relevance, and when you get into the 1000's they become fairly unwieldy. So, I decided to change my scale.

Playing around on Wikipedia, I discovered the concept of "orders of magnitudes of speed", and decided alter it to fit my purposes. Mystery Men! will have ten speed bands, ranging from 1 (slow humans) to 2 (normal humans) to 10 (speed of light). People can move from one speed band to a higher speed band by running, maintaining the higher speed with feats of Constitution, and reaching even higher speeds (just momentarily) by a feat of Strength.

The speed scale is as follows:


Obviously quite a leap from "old lady" to "light speed", but I think in the context of the game it should work. You'll have your normal speed, rated 1 to 10 - characters begin with a normal speed of 2. You can run at the next highest speed for 1 round, and thereafter can continue at that speed with a feat of Constitution each round. You can generate a burst of speed at 2 speed levels higher than your normal speed by making a feat of Strength, but the burst only lasts 1 round, max. You always have the option to move at a slower speed, of course. The table included in the rules will show speed per round, speed per turn and mph/kph for each speed rating.

Initiative. which was to be determined by speed, will now be determined by a d10 roll modified by your Dexterity bonus and speed (so, with a 30 Dex and 10 Speed, you'd end up with a +19 to initiative - pretty hard to beat). Speed will also govern how many actions a character can take during a round. When engaged in combat with a foe, compare your speed to his speed. If your speed is twice his speed, you can make two actions (move, attack, activate power, etc) per round. If your speed is triple his speed, you can make three actions. In order to keep super speedsters from being unbeatable, we'll cap it at three actions per round for now.

Hopefully, this will make speed a relevant ability in the game, while keeping it easy to track and not something that will break the game.

And yes, I think I've decided to drop the panel/page/issue time concept for the more traditional rounds/turns, etc. MM! is supposed to be a reworking of old school games to make learning it simpler, so it makes sense to stick with language most gamers already know.

Currently, I'm working on NOD 7, which will feature 3 cities. Blackpoort is written and I'm working on Lyonesse now and then have to write Antigoon. Right now, I'm on schedule to publish in the middle of February.

After I adjust the speed rules, I'll be ready to put the Mystery Men! beta rules out for play testing. If this project interests you, please consider downloading the rules and running a quick game, or even just going through character generation and running a fight. If you do play with the rules (or even just read them), I hope you'll give me some feedback. The beta rules won't include the sample setting or all the explanatory text on "what is role playing", "how you roll dice" - that will be included in the final product. Right now, looks like the final game will come in at a slim 60 pages, so it should be pretty affordable in print, and the e-book will be free.

I'm also working on writing my third Hexcrawl Classic for Frog God Games. The first should see print in February - very excited, as it's my first freelance sort of gig. I've just been tapped to be a part of a much larger project for the Frog God, which I'll be cranking on for the next couple months. Despite the work load (being busy is a blessing!), I'll continue to post to the blog just about every day.

Speaking of posting - I'm getting lots of page views on the Megacrawl 3000 posts, but nobody is playing along in the comments - not for the last 2 posts. Since I inteded Megacrawl 3000 as a game for the community at large and not a creative writing exercise for me, I'll probably drop it after this last episode for lack of participation. If you want to see it continue, by all means get involved!

That's all for now. Should make another Blackpoort post tonight, and then start posting on Lyonesse later this week. I also want to do some more retro-engineering on Darkness & Dread, have Noble and Everyman classes that need to see the light of day, and want to begin statting out some demon lords for NOD. Lots to do.
Posted by John Matthew Stater at 11:46 AM