All Strong!! All Brave!! All Heroes!! 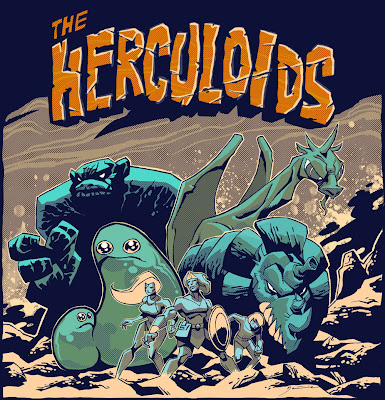 They are the Herculoids!!

After statting out the Arabian Knights, the venemous pao requested the Herculoids. My love of the Herculoids and their bizarre world of Amzot is second to nobody's, so here they are, built with 30,000 XP each ...

ZANDOR
One of the best things about the Herculoids is that they don't seem to have ever explained them - at least not in the old days. Here's my take - Zandor was a brilliant scientist who wanted to get "back to nature", doing so on the primitive planet of Amzot. He took along his wife and son and a few creatures (part of Project Herculoid) created in his laboratory. The Herculoids are equal parts nature and science. This is the best explanation I can come up with for a guy who lives in a tree yet clearly understand high technology, and who fights using a sling shot and exploding rocks - rocks which also seem to be produced by Tundro. Moreover, if the Herculoids are just alien animals from Amzot, why don't we ever see any other of their kind roaming about?

* Okay, I just got through saying that I think Zandor is a scientist, and then I go and make him an "adventurer" instead of "scientist" - why? The scientist class in MM! is good for modeling characters that use lots of scientific gadgets, and often different gadgets in different adventures. Zandor doesn't, so I'm making him a member of the adventurer class with scientist as his background/occupation.

* Based on the fact that Igoo manages to be about twice the height of Zandor in some scenes and then about two or three times bigger in others. When presented with sloppy editing - make it a power!