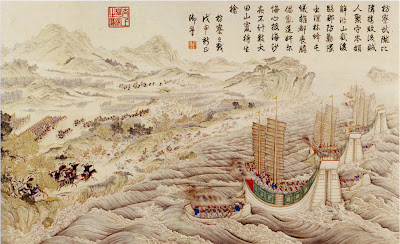 4505. Island of Dust: This island was once covered by lush grasses and macacque peach (kiwifruit) trees, but the destruction of the islands of the Nakdani sent a wave over the island that carried away the soil and sowed what remained with salt. The island is now inhabited by two factions – the men of the barren high plateau and the men of the shore, which is covered with scrub. The only fresh water comes from springs on the plateau, making the men of the plateau the island’s masters. They demand a heavy tribute in shellfish from the men of the shore, as well as taking their most beautiful daughters to be their wives.

The fresh spring on the plateau arose after the disaster. It followed a trio of pearl-skinned demons that looked like glistening children with black eyes that burrowed up from the underworld. The spring does provide plenty of sweet water, but those who drink from the spring itself lose their ability to sympathize with others, gradually becoming cold and humorless and thoroughly chaotic.

4547. Qatu of the Nine Fingers: Qatu is an elder shugenja that lost a finger to the belly of a tiger whose skin now forms her cape. Qatu is a big-boned woman of Amazonian stature, with gray-green eyes and dull brown hair worn in thick braids.

Qatu’s tower is a pagoda of fulgarite bricks bound in copper bands. The roof is peaked, and electricity courses down the length of the building, making it very dangerous to approach without invitation or some manner of protection. A lightning elemental is bound in a globe of glass in the roof of the building, powering the pagoda’s defenses and other bizarre devices kept by the shugenja.

Qatu has a treasure of 1,430 sp, 1,520 gp, a rose quartz worth 200 gp, 22 black bear skins worth 5 gp each, a brass locket holding the skin of a human thumb (worth 5 gp with or without the skin), a brass toe ring worth 95 gp and, her greatest treasure, a strange salt-glazed jug shaped like a squat samurai. The jug holds a giddy wine in which resides the essence of Manai, a warrior who adventured with the shugenja in olden times before tangling with a lich and winding up in his strange, pitiable state.

Posted by John Matthew Stater at 8:26 AM