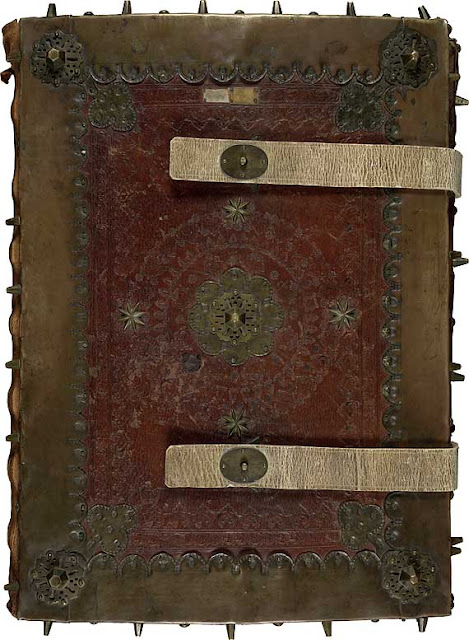 Finishing up NOD 12 - just a bit more work to be done on the hex crawl, then writing the OGL page - always takes a while due to all the critters from the Tome of Horrors that show up. Anyhow - a few more locales for you to preview ...

40.97 Breezy Book: A skeleton lies in the grass here. The skeleton has a crushed skull and ribs and is wearing a robe of damask silk and a tasseled hat. The skeleton has two gold teeth (fangs, actually), a silver dagger on his belt and a leather pouch that holds his spellbook.

The spellbook has a wind walker trapped within it. The wind walker’s presence makes it impossible to read the spellbook, for the pages are whipped around violently, as though in a high wind. Attempting to handle the book carries with it a 2 in 6 chance per minute of ripping some pages and ruining one of the spells contained within. Naturally, the highest level spells are ruined first.

51.101 Chariot: Having been driven from his lair on a deeper level of Hell, the lich Sheva of the Silver Hair has wandered Asphodel on a chariot pulled by two giant hyena. She has ever sought to build a network of alliances based on favors and threats that might return her to her lair, currently inhabited by the efreet Nabeel in the metallic desert of Gehenna. Many secrets are held in her lair, secrets she must reclaim to advance her grander schemes. Sheva’s phylactery is hidden within the tombs that circle the pit of Tiamat [57.99].

67.105 Skeletal Harpies: Nine skeletal harpies are roosting in a grove of trees here, nibbling at the sour fruits that hang there. The fruit look like human hearts, and have a pulpy, acidic flesh. The harpies really hunger for human flesh. Each time they score 5 or more points of damage with a bite attack on a humanoid, a layer of musculature covers their bones. When they have scored a total of 35 points of damage, they reform as true harpies, with all the powers and abilities of such creatures.

86.96 Lake of Sorrow: A long, narrow lake sits here on the savannah, surrounded by a thick tangle of briars that bear fragrant black roses. Bubbles rise and pop on the surface, bringing with them the sounds of sighs, moans and cries that hang over the still waters. The water of the lake is intoxicating, leaving people in a deep melancholy and unable to summon the will to do anything for 24 hours other than defend themselves. At the end of the 24 hours, they must pass a will save to keep from drinking again.

97.91 Double Trouble: The land descends into a series of interlocking canyons here. The canyons are barren of life, with grey, rigid, angular sides. Once per day, a chill wind begins to blow, tussling hair and tugging at clothes. It grows stronger, and soon forms small whirlwinds that combine to form larger whirlwinds that glow with a pale, cheerless light. Assume each character has a 1 in 6 chance per turn of being touched by one of these whirlwinds. The whirlwinds only last about for one hour (6 turns).

Any person enveloped by a whirlwind emerges unscathed, but with a double intent on murdering his “comrades”. The player has a 50-50 chance of playing either his own character or the double, and only he will know which character he now plays. The character and his double cannot harm one another – any attempt to do so meets with failure and crushing pain (6d6 points of damage) for the instigator of the violence.

Image found HERE
Posted by John Matthew Stater at 8:37 AM