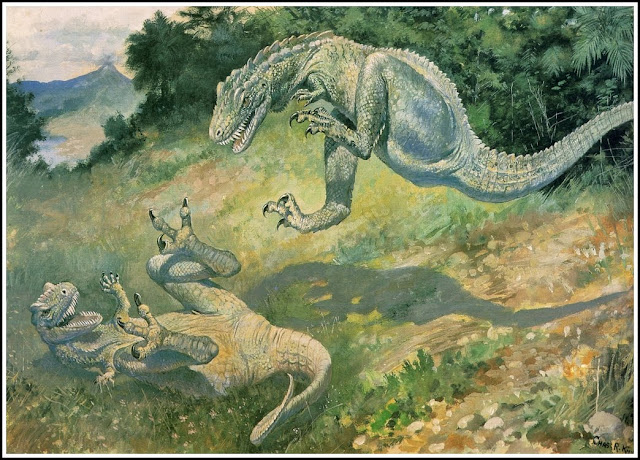 Dinosaurs. Awesome, right? Lots of them, though – hard to keep track, especially when scientists keep changing their darn minds about them (they’re brontosauruses because that name is cooler, and triceratops are so a species of dinosaurs, so shut up scientist man). Here’s a handy dandy guide to basic forms and a few handy “mutations” to keep your players guessing.

Not scientific, but just a quick batch of stats for some basic dino types. And yes - I already know it doesn’t cover everything, just the stuff that pops up most often in old dinosaur movies and the Flintstones.

CERATOPSIANS
These are the fellows with the lovely head fringes and horns, like triceratops. Assume the basic ceratopsian is about 30 feet long.

PTEROSAURS
Technically not dinosaurs, but if they’re on the Flintstones, they’re close enough for me. These are the flyers. The basic pterosaur has a wingspan of about 15 feet and a length of about 5 feet.

SAUROPODS
The big boys – quadrupeds with long necks who make little tremors when they walk. Assume that the basic sauropod is around 150 feet long.

THERAPODS
The therapods cover the bipedal carnivores, of which the T-Rex and Velociraptor are now the most famous. Assume that the basic therapod is huge in size (i.e. around 30 feet long). When a therapod bites prey, it grabs the victim in its jaws, shaking and chewing for automatic damage in subsequent rounds. Only victims with shells, bone frills, or spines can avoid the horrendous tearing damage.

THYREOPHERANS
These are the quadruped armored or spiked dinosaurs, like stegosaurus and ankylosaurus. Assume that the basic thyreopheran is about 20 feet long.

MUTATIONS
No more humdrum dinos for us, my friend. Let’s make them fabulous!

3 Big and beefy – increase HD by 50%, cut movement in half and if they are at least 60 feet in length they can cause an earthquake (as the spell) once per day in a 100-ft radius. Increase damage by one dice size.

7 Gold scales – dinosaur is immune to non-magic weapons and +2 to save vs. magic.

8 Black scales – dinosaur surprises on 3 in 6 at night, has darkvision.

10 Massive Brain – dinosaur has high intelligence and can use a psychic blast (30-ft cone, save or stunned for 1d4 rounds) three times per day.

13 Leaper - can leap up to 20 feet forward or 10 feet backward. When leaping to attack, treat as a charge.

14 Gorgonoid – has metallic scales as a gorgon; increase AC by +4.

17 Manticoroid – has tail spikes that can be fired like those of a manticore for 1d6 points of damage.

18 Displacement – per the mirror image spell (4 additional images), can be used three times per day.

22 Stone Cold Awesome – has a petrifying bite, per the cockatrice. Dinosaur can swallow and ingest the stone if a carnivore.

24 Scream – per the shout spell, usable three times per day.

25 Rider – dinosaur is ridden by a caveman bounty hunter (per dwarf fighter level 1d4+4). Rider wears the equivalent of leather armor and carries a club and three throwing spears.

26 Trill – dinosaur can trill as a remorhaz.

27 Song – dinosaur produces a vibration that causes sleep (as the spell). Usable three times per day.

Have any other ideas? Put them in the comments – let’s take this table to 100!