Although spectres traditionally seem to be played as actively hostile entities (chaotic, and all), they don't have to be, and in fact can make for pretty excellent ghost encounters. Level drain does a great job of recreating, for the players and thus their characters, of the sheer fright and revulsion of being touched by "that which should not be!". 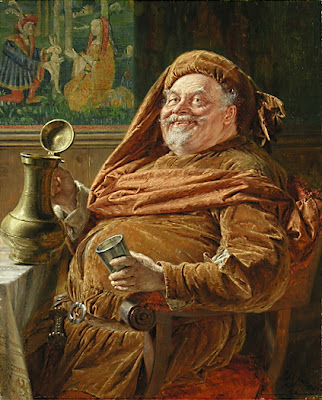 Forloth was a great man in life - great in deed in his youth, and great in girth in his dotage. Always a man of monumental hunger and thirst, he spent his later years in his favorite tavern at his favorite table, regaling the customers with stories of great deeds in far away lands, his wine goblet and lap rarely empty and his coin flowing freely. And so it was when he died - a small belch, a rolling of the eyes, and gone. It took four strong men to remove the body, and the whole town attended the funeral - even the Lord Mayor. A couple weeks later, the first dead body was found in the cellar - a serving wench - long in the tooth but no less beautiful for her years of service and always the favorite of Forloth - keeled over on a barrel of wine, her hair turned stark white. When Brena's laughter began being heard echoing in the rafters and the wine began turning sour, the townsfolk soon quit the tavern and the landlord was forced to move his establishment. The tavern still stands empty, but a few brave souls have claimed to peek in the thick windows at midnight and see Forloth at his table, Brena in his lap, a ghostly goblet of spirits in his hands.

Cobhar was born a beggar and thief, and spent his childhood learning how to steal and get away with it. Always an angry man, he hid it well and made a reputation for himself of a leader among the beggars and outlaws of the city - an unofficial ambassador of the underclass whose company was enjoyed by commoners, aristocrats and adventurers alike. Alas, he was a man of ambition, and one of those ambitions was to forge his beggars into a corps equal to the guild of thieves. The master of thieves, Lord Nock, couldn't allow that, and so one night Cobhar took his last drink of rum and had his body unceremoniously dumped in the harbor, wrapped in heavy chains. The very next night, the thieves were surprised in their shadowy citadel by the appearance of a waterlogged man in chains. Few escaped that hideout, Lord Nock among them, and the reign of the thieves was over. Their hideout remains empty, the lair of Cobhar's spectre and, stories say, still flush with the plunder of the guild. What nobody knows, though, are how many of the old thieves now haunt the halls of the guildhouse ...

Maela was a simple woman who lived in a small village by a river. Married to the miller, she was a respected member of her community who wanted, more than anything, to give birth to a child. After many years, she and the miller were blessed with a child, bright of eye and blithe of spirit. All was well for many years, until the coming of the orcs. In a flash, the village was razed, the mill set alight with Maela's husband and child sealed within. The woman rushed into the blaze, but was unable to save them, and in her trauma rose a month later as a spectre. The charred remains of the mill still stand by the river, and the village is still abandoned. Maela has a powerful compulsion to care for people in distress, and a keen desire to embrace children and other small humanoids (gnomes, halflings). She is not hostile unless rebuffed.

GUILLA OF THE AUBURN LOCKS

Guilla was the prettiest girl in town - rosy cheeks, auburn curls, brilliant green eyes, etc. - and always popular with the men of the town (young and old). There were stories, of course, that she was perhaps to desirous of their caresses, but she denied everything and her father and mother would not hear of her indiscretions. It was when an adventuring bard entered the picture that things went awry. Handsome and dashing, for the first time in her life, Guilla herself fell in love. In the past, she had always had the upper hand, but now things were different. The bard stayed in town for a couple weeks, and spent nearly every waking moment of that time in her company, until the jealous men of the town had had enough and vowed to end his tenure as Guilla's lover. It so happened that the bard finally acquiesced to Guilla's pleading and vowed he would steal away with her on Midsummer's night. The couple would make their way to the great city over the mountains and there live happily ever after. On his way to window, though, the bard was waylaid by the townsmen and, beaten and bloody, sent down river tied to a raft, never to be heard from again. Guilla waited the night through, and when the next day she heard that the bard had crept away in the night, her heart broke. Two days later, in a daze, she drank from a vial of poison and ended her life. At the next Midsummer night, during the revels of the young, a beautiful woman was seen gliding through the streets. One reveler was surprised by her, especially when he recognized her as Guilla, and when she embraced him, he died. Now, every Midsummer night, the ghost of Guilla glides through the streets of the town, seeking the love and adoration she once had in life, accompanied by the spectres of those she has embraced. There are three such spectres - fawning young men with eyes for none but Guilla. They will defend her to the "death".

SCENTH, THE SENTINEL OF BAGWELL HALL

Scenth was a man-at-arms in the employ of Baron Pirpasko, a man with many enemies who was ever fearful of the assassin's blade. It so happened one night that Scenth was stationed outside the baron's room as sentinel. While the baron was fast asleep, the baroness, a raven-haired beauty of questionable morals, crept out of bed and stole away with the sentinel for a midnight dalliance. The couple finished their lovemaking and she returned to her lord's chamber while Scenth returned to his post. The young warrior had barely got to his post, though, when a scream broke the nocturnal silence. Opening the door, he saw the baroness clutching the bloody baron to her chest, a cruel smile on her lips.

"The baron has been murdered," she screamed, her smile turning into a look of horror as other warriors reached the room."An assassin got past that foolish boy and killed his master!"

Despite his protestations and accusations, the lad was found guilty of shirking his duty and was summarily hanged. The next night, though, as the household prepared to retire, they discovered the young man back at his post, his head still crooked and scarred by the noose. The baron's squire challenged the ghostly lad and was nearly killed when his body was run through by Scenth's ghostly sword. The man was left a shaken wreck, and the rest of the guard soon quit the manse, along with the duplicitous baroness, the baron's chest of treasure locked away in the chamber beyond her reach.

Paril was a thief, and one of the best in the world in his day. No vault had ever foiled him, and no ancient temple or forbidden boudoir had proved proof against his cunning. So it was that he delved deep beneath the earth in search of a sceptre of wondrous powers - one more challenge to be overcome. He stole past dozens of guards and wards, tricked a cyclops, walked a wire of spider silk and plucked the sceptre from under the nose of the demon Tessasses. Sceptre in hand, challenge overcome, he made his way out of the dungeon and was, quite suddenly, crushed by a bit of ancient masonry. His back broken, he fell prey to giant rats. An ignoble end to a master thief. Now, his spirit haunts the corridor, the sceptre still in his mortal form's skeletal hand, beneath the tumbled masonry.