And Now - Our Special Guest Villain 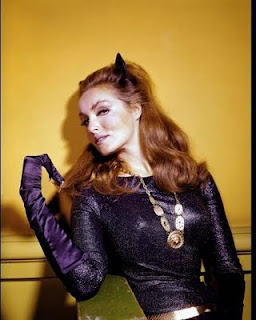 A couple posts ago I statted up Invisible Woman using the alpha release rules (such as they are) for Mystery Men! Now, to show how the powers can be used to build an essentially non-powered character (and to give some attention to the other big name in comics), I decided to apply some stats to Catwoman.

Even though, for all intents and purposes, Catwoman has no super powers, it is fairly obvious that her abilities far exceed that of a normal human being, even within the fantasy universe of comic books. The powers in the game are really meant to represent results - i.e. what a character can do - not freakish abilities that are handed out by atomic blasts, radioactive animals or sharing some DNA with the gods. In that sense, Catwoman should definitely have some powers.

Ability Scores
While Sue Richards is a "normal person", ability-wise, with extraordinary powers to make her a super hero, Catwoman is almost the opposite. Catwoman has, above all, impressive dexterity - acrobatics, sneaking about, slinging that whip, etc. Naturally, she has a high charisma as well - you can thank the primarily male audience of comic books for that - and probably a good intelligence and wisdom as well. If there are any stats we can "ignore", they're probably strength and constitution. So, we have 14 dice to distribute among our ability scores, we'll put 1 each in Strength and Constitution, 2 each in Charisma, Intelligence and Wisdom and the remainder, 6, in Dexterity:

Wow - rolled extremely well for Dexterity. If I was doing a straight conversion of the character, I probably wouldn't have gone that high with Dexterity, but since I'm randomizing this, we'll go with 25.

Powers
Selina Kyle is an adventurer. Because she's a major character and a long-time villain, and because I'm going to pit her against Invisible Woman to demonstrate the combat rules, I'm giving her 50,000 XP to spend on powers and levels. Normally, I would give her Super Dexterity (re-named from Cat's Grace), but since her ability score roll was so good, I don't need to. Her powers (and costs) are as follows: 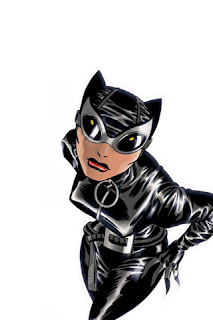 
* At the moment, I'm doing time in Mystery Men! in terms of panels (about 1 minute), pages (10 minutes) and issues (1 day). One commenter last time didn't care for this, and I'll admit it's cutesy (kinda like calling a referee a Dungeon Master), but I kinda liked it. I'm not married to the concept, though, so I'd love to hear what others think of it.


So - next time around I'll run a little scenario in which Catwoman has broken into the Baxter Building to steal a cat statuette taken from the tomb of the Living Mummy. Sue Richards hears the alarm and goes to investigate ...
Catwoman is the property of D.C Comics and the application of Mystery Men! stats and use of images of the character in this blog post is not intended to threaten or infringe on their copyright or intellectual property. Top image is Julie Newman as Catwoman from the greatest TV show ever made, and the bottom image is by Darwyn Cooke.
Posted by John Matthew Stater at 7:55 PM