Celebrating The Dragon - A Challenge

Greg at Gorgonmilk posted some of his favorite covers of the venerable Dragon Magazine, and one of them just happens to be one of my favorites as well. So I got this idea - and I challenge the RPG blogosphere to do the same - find your favorite Dragon cover and write up a brief description with stats. Any era or edition (or any set of rules for that matter) - let's forget the edition nonsense and celebrate a grand old magazine with a little fun and creativity!

For my part, I give you this little beauty from Denis Beauvais 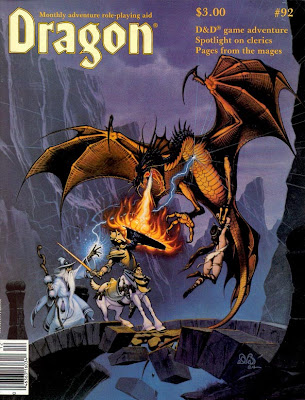 There was much honor to be had in escorting Mirandra, one of the Vestal Virgins of Nomo, to storied Galardis to reconsecrate the Temple of Vesta in that city, recently uncovered from rubble in one of the ruined precincts. For Keiros the Centaur, it was a chance to cement his reputation as a paladin of the highest water, a reputation he had worked especially hard to establish given the proclivity of his people to drinking and fighting. For Gimwold of the Crooked Staff, it meant a chance to delve into the infamous Librarium of Galardis for the lost tomes of the ancient elves. Neither Gimwold and Keiros trusted the canyon bridge they had come to in the Klarkash Mts, but it was a short span, and the men-at-arms and bearers were already grumbling about journeying through those dark and wicked peaks. It was then that Gigatrikh, wretched scion of the great wyrm Yakh Six-Claw, chose to strike. A nubile maiden was just the thing his hoard lacked!

* The centaur race and paladin class can be found in NOD 1
Posted by John Matthew Stater at 7:46 PM