Update from the Land of Nod

Just a quick update from the merry old Land of Nod.

1 - Finished maps for Antigoon and Blackpoort today, for NOD #7 to be published in Feb 2011. Haven't numbered Antigoon yet, but will soon. I'm going to work on Lyonesse tomorrow and then get working on writing those city-states up.

2 - My Hawkeyes won the Insight Bowl having lost their top receiver (drug charges) and first and second string running backs to transfers before the game. How 'bout them Hawks?!

3 - Finished writing up the powers for the alpha release of Mystery Men! Should finish up the rules this week or next, at which point I (and anyone else) can do some playtesting. I should begin showing off some of the art in January - can't wait. I have a good feeling about this one.

4 - Watched Mystery Science Theatre 3000 yesterday with the kid - Hercules Unchained. It (the MST3K show) was made 20 years ago - damn I feel old.

5 - Starting work on Hexcrawl Classics #3. I've seen some of the art for the first two, and when I get permission will show some of it off on the blog. 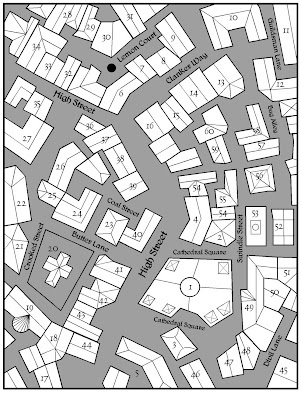