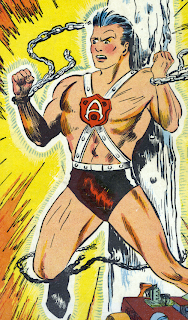 In the world we know, the nation of Tibet was conquered by the communist Chinese in 1950. In the world of Mystery Men!, however, things might have gone a bit tougher for the Chinese, as Tibet has produced an astounding array of super heroes. Also notable is the proclivity for Tibet-trained heroes to eschew much clothing.

With the likes of Amazing Man and Phantasmo on their side, I think it's a safe bet that Tibet remains an independent nation in the world of public domain comic books.

John Aman was an orphan chosen by Tibet’s Council of Seven to be trained to mental and physical perfection. At age 25, his training finished, he returns to the United States to battle crime with the assistance of private investigator Zona Henderson and her kid brother, who becomes Tommy the Amazing Kid. His greatest enemy is The Great Question, an exile from the Council of Seven.

Dr. Drake Gorden was stranded on a deserted island when his freighter is struck by a typhoon. The island is home to a Tibetan monk, who gives Diamond a magical black diamond that gives him the strength of 50 men.

Flame (Super Hero)
Created by Will Eisner and Lou Fine, 1939

Washed downstream to Tibet after a flood (a neat trick), the infant Gary Preston is found by a group of lamas. With the lama’s mystic training, he learns to control fire and heat.

Jethro Dumont is a New York millionaire who travels to Tibet to study to be a lama. After ten years he learns the mantra “om mani padme hum”, which gives him an array of powers. He also gains powers from his scientific knowledge of radioactive salts. His secret guise is as the Buddhist priest Dr. Pali.

Duke O’Dowd was serving in the Foreign Legion stationed in Bavakuria when he meets Wah Le, the ruler of an ancient lost city of Tibet. Wah Le gives the soldiers a magic belt with which to combat evil. Back in New York, O’Dowd works as a taxi driver. He is assisted by Toby, a shoeshine boy.

A man known only as Ken gained sorcerous powers after receiving a mystic tattoo on his forehead while visiting Tibet. He returned to the United States and took up the fight against crime.

Phantasmo spent 25 years in Tibet learning the mystic secrets of the lamas before returning to the United States to fight crime. He takes the name Phil Anson, and pays bellhop Whizzer McGee to watch his body while he travels astrally.

Radio engineer Fred Carson travels to Tibet and meets a yogi who gives him a magic ring that gives him all manner of wondrous powers.