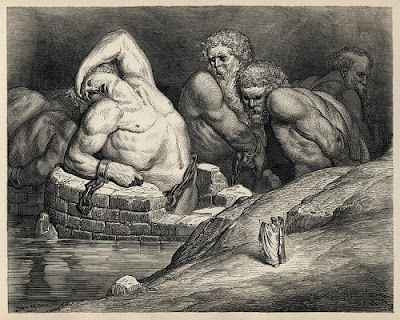 Finally. The last of the nine circles. Here are a few previews of the things to see in the final bit of the Hellcrawl, due for publishing in a couple weeks. It includes two of the key components to this circle - the elder titans imprisoned here after the titanomachy and gigantomachy, and one of the four angelic watchtowers meant to provide a last bit of help for those who wish to escape Hell and return to the surface of Nod.

57.52 Hunters: A pack of 13 winter wolves patrol this hex constantly in search of a golden elk that roams Cocytus, a glimmer of hope in an otherwise hopeless place. Adventurers can try their luck as well – the elk is capable of casting the following spells, each once per day: Heal, cure disease, neutralize poison and restoration. The wolves are encountered on a roll of 1-4 on 1d6.

58.50 Clytius: Clytius, the elder titan, was immolated by torches conjured Hecate, and he burns to this day. He is chained to the walls of Cocytus here with adamant links, sending flickering shadows over the frozen hills and moaning in agony. Salamanders caper about him, basking in the warmth and sampling the flesh of the shades roasting in his fires while skewered on pikes. Magical shields and armor tempered in Clytius’ flames grant their wielders immunity to fire for a temporary amount of time. Each day, there is a 1 in 20 chance that the armor or shield loses this new magical property.

60.53 Watchtower of the West: Though Cocytus is the very heart of Hell, it is not without angelic influence. The gods of Law, cognizant that the only way for mortals to escape Hell is by being of a non-Chaotic alignment, and knowing how they do the way Hell can prey on a person’s soul and by degrees turn them from the path of Law (or even Neutrality), they established four watchtowers staffed by powerful champions of Law. These angels are in Hell to provide atonement and succor to Lawful and Neutral souls in Hell.

The watchtower is composed of brilliant white quartz and takes the form of a grand tower keep, about 100 feet tall, with pearescent battlements and golden spires that give off a warm, inviting glow. The battlements are guarded by three companies of luminous aasimar, who wear white tunics (no armor) and carry white heavy crossbows, silver glaive-guisarmes and daggers and quivers of twenty +1 crossbow bolts.

Araqiel is the angel of judgment for clerics, and this is his watchtower. Here, Chaotic clerics can turn from the path of wickedness and atone for their past sins, and neutral druids can prepare themselves for the ordeals ahead. Clerics in need of atonement must fast for one week and cast aside their armor, relying until they escape Hell on nothing but their spells.
Posted by John Matthew Stater at 3:23 PM