I thought I'd show a few more of the monster stats from B&T. The project is dangerously close to being finished! It's also a chance to show off some of the art I've commissioned for the project from Jon Kaufman. Check it out, ladies and gents. 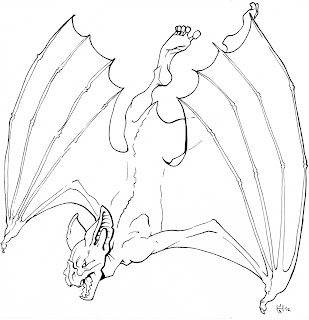 These creatures look like large, furry humanoids with bat wings that end in clawed hands and bat heads. They are twice the size of a man, with a 12 to 15 foot wingspan. Fearful peasants might even mistake them for small dragons when they fly by night. They can attack without penalty even when they have been blinded.

Mariliths are six armed female demons with the lower body of a snake. In each hand they wield a longsword and they adorn themselves with jewelry. A marilith is 9 feet tall and measures 20 feet from head to tail. They weigh 2 tons.

Though mariliths thrive on the grand strategy of war, they love physical combat and never pass up an opportunity to fight. Each of a marilith’s six arms can wield a weapon. There is a 5% chance per arm that it wields a random magic sword). Mariliths seldom rush headlong into battle, preferring to hang back and size up the situation first. They always seek to gain the best possible advantage from the terrain, obstacles and any weakness in their opponents.
A marilith can attempt to summon another of its kind once per day, with a 20% chance of success.

Locathah are humanoid in shape, but have the scaled skin of fish and the heads of fish. The average locathah stands 5 feet tall and weighs 175 pounds. Females and males look very much alike, although the former can be recognized by the two ochre stripes marking their egg sacs. Locathahs speak their own language. Locathahs lack teeth, claws, and other natural weapons, so they are not especially dangerous if unarmed.

Locathah gather in tribes of 1d10 x 10 warriors and non-warriors equal to 100% of the warriors. They are ruled by chiefs and sub-chiefs, and typically live a hunter-gatherer existence with supplementary kelp gardening and fish herding. For every ten warrior in a tribe, there is a 3% chance that the tribe has an adept to provide spellcasting.

Locathah units in mass combat are as likely to be defending their tribal lands as they are to be mercenary units. Locathah squadrons are led by sub-chiefs with 3 HD. Locathah tribes are led by chiefs with 1d4+6 HD. If you wish, roll d% to randomly determine the type of locathah units present. Chiefs are always accompanied by a squadron of armored crab-warriors.

* Shellycoat armor is manufactured by several undersea folks, and consists of a hundreds of shells woven onto a backing of shagreen in the manner of scale mail. Shellycoat increases AC by 1 point.