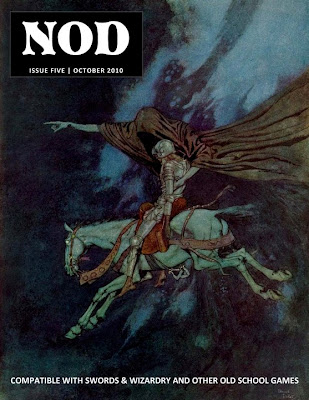 Quick note - I am finishing up NOD #5 and should have it available by next week. Contents will include a couple dozen vampires drawn from world folklore, Mines & Minerals, the Illusionist class and his spells, Ibis - City of Sorcerers, level 2 of Izrigul's Palace (continued from last issue) and another chapter or two of Phantastes. Cover image to the right.

1124. The drab moors give way here to a colorful garden of pistachio trees, maples and, in the springtime, brilliant tulips and lilies. A meandering path of crushed stone takes one from the front gates to the little castle within, a tower keep that looks as though it were carved from ivory. The garden is worked by thirty children dressed in tattered clothing, all of them wiry and underfed. The children work in a kitchen garden of over sized cabbages, radishes and eggplants. Secreted in the trees are a six ettercaps, all servants of the mistress of the ivory tower, an annis hag called Urmelia. Urmelia and her minions stage raids on the Emperor’s Way, bringing back slaves who are, using the hag’s special recipe, changed into mere children. Should the hag’s formula be used on a human or halfling, they find themselves reduced in age to 8 or 9 years, their strength score cut in half and their dexterity dropped by 2 points. The hag usually has a dozen doses of the potent potion on hand. In the tower’s donjon Urmelia keeps her sister Yordis, polymorphed into a small child and bound with silver chains that disrupt her ability to use magic.

1131. The woods here hold a forgotten cemetery, overgrown with black willows crowded with white butterflies and pale vines that produce a grape from which one can brew the “wine of ages”. Here, aged ghouls come to lie in the cool grass and dream their dark, lazy dreams. A marble cupola in the center of the graveyard served as a shrine once, but is now the lair of three unpleasant gravebirds, who have used their ability to speak with the dead to learn many secrets, secrets they will divulge for the price of a squealing babe or blushing maiden.

1137. A cave flecked with serpentine snakes its way into the earth, first becoming chilly as one leaves the embrace of the sun, but then becoming hotter and drier with every step until the spelunker emerges into a great vault intersected by streams and rivers of magma that are spanned by natural bridges of basalt. On three of these bridges there are trapezoidal shrines made of serpentine and pierced by a single dark, open entrance. The shrines are approximately 30-ft to a side. The interiors are clad in polished obsidian and hold idols of the ancient ophidians.

The shrine of Yibolokendh, goddess of hunters, who appears as a tall ophidian female wearing armor and trophies of the hunt (primate skulls). The shrine is guarded by six inphidian warriors and overseen by an ophidian seer who speaks of the beginnings of things.

The shrine of Ichasha-Yath, goddess of the deadly chill that terrifies all reptilians. The goddess appears as tall ophidian with icy eyes and chocolate brown scales and carrying a silver dart. It is guarded by six inphidian warriors and overseen by an ophidian seer who speaks of th ends of things. The seer of Ichasha-Yath can summon snowstorms once per day.

The shrine of Labos, god of medicine, who appears as a stately male ophidian, graceful and adorned with long, white hair and purple eyes who carries a map of the ophidian anatomy. It is guarded by six inphidian warriors and overseen by an ophidian seer who speaks of the secrets and lies who can heal the sick and bring the dead back to life – for the right price.

1141. On a crystal clear bay there is a large village of swarthy men and women, a sort of lost colony of ancient Nabu called Kademand. The Kademandi mostly deal in the timber trade, shipping wood from the Nybling Hills to Antigoon and Ophir. The village buildings are constructed or marble quarried nearby, with even the most common hovel looking far above its station. The village is surrounded by a 15-ft tall wall of marble, 10-ft thick and studded with 25-ft tall towers. The village is ruled by a nomen (lord) called Thorothi the Sagacious, a learned man of astronomy and ancient history who keeps a small library of scrolls and well worn tomes.

The bay on which the town sits is inhabited by a herd of selkies (fey seal people), and in fact is called Selkie Bay. Thorothi was married to the most beautiful of the selkies, Brece, after using helping the selkies drive away the giant octopus [1149] that once lived just outside the bay, harassing selkies and humans alike. Brece now spends half the year in human form attending her husband, and half the year in seal or selkie form playing in the sea. Both of them are satisfied with this arrangement, and their marriage keeps their people at peace, though it has not yet resulted in an heir for Thorothi.

1149. A giant octopus, called Death’s Gauntlet by the people of the region, dwells here in a vast, undersea cave, brooding at his recent defeat by Thorothi of Kademand [1141]. In his cave he keeps an obsidian shield, too heavy for a human and too small for anything else, worth 200 gp.