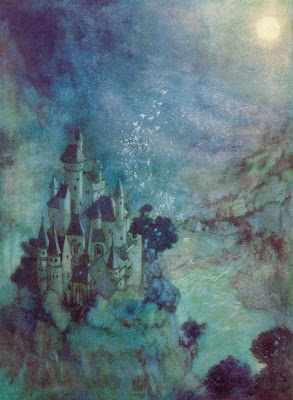 And another six to whet the appetite.

1006. Luinel is a mid-sized village of about 40 thatched huts surrounded by a picket of pointy sticks and a tangled thicket. The villagers mostly work as woodsmen, but they also keep a few goats, sheep and swine. They are best known, though, for their oxen – powerful beasts with red coats and horns that stretch 4-ft from one tip to the other. These colossal beasts are capable of hauling twice that of normal oxen. The village is governed by a mayor elected by a council of elders and important men and women.

Of particular note is a tall, conical structure in the center of the village. This particular hut is surrounded by a low wall of bright red bricks, with a single opening that is always guarded by an armored man with a masked helm and a stout spear. Inside the hut there is a strange statue, abstract and wretched and hurtful to the eye and soul. The villagers do not allow people to enter the central hut, and when questioned they say only “It is the heart of the village. Can you not hear it beating?” with wide eyes and a look of eerie calm.

While adventurers are welcomed into the village, there is no inn, so they will have to sleep with different families. If they show too much interest in the idol and are of a lawful bent, the families will murder them in their sleep and drag their corpses to the hut, where they will have disappeared by the next morning. The villagers have the abilities of 3rd level assassins when given a mission by their idol. It is said that when a body is given over to “the heart”, that a new red ox appears in the communal pen.

1025. A small family of four hill giants scrapes out a living in the surrounding hills by hunting big game. The cavern holds a towering kiln that the giants use as a hearth for roasting meat. Tucked into the ashes of the kiln there is a sinister magic dagger called the Tooth of Vexus. The Tooth of Vexus is a +2 dagger. Vexus was a potent wizard in these hills some 300 years ago, but not many folks now remember him, primarily because he died in the process of creating a powerful spell to wipe away memories. C’est la vie! Once per day, the holder of the dagger can cast a spell that automatically nullifies saving throws against it.

1032. There is a bell tower here constructed of dingy, yellow-brown stone. The tower is set on a grassy sward grazed by wild ponies and appears to be abandoned. Careful observers might note that the floor of the bell tower is a spiral of narrow stones. The bell has no rope, but if one manages to ring it, they will cause the spiral floor to turn into a winding spiral stair that leads down to a hexagonal room. Three walls of the room hold a mirror and are painted in a primary color (red, blue or yellow), as opposed to the other walls which are painted black. The mirrors appear to be normal, but if touched prove to have no substance to them. They are, naturally, portals. Each one has a frame of gold set with gems – one with topaz, one with aquamarine and the third with tiger’s eye. Should any of the mirrors be touched, a magic mouth will appear on one wall and say “I shouldn’t do that until you have heard the riddle” in a somber, throaty bass.

At this, a second mouth appears on a different wall and, in a crisp, clear soprano, says, “Choose the picture fair, of fire and light, always bright, small as a snail but containing all there is to see.”

If one answers “The Eye”, a third mouth appears and says, in a soft, quiet voice, “Then what are you waiting for, the master awaits!”

Mikelroy the Irregulous’ home is a round chamber 500-ft in diameter divided by dozens of arches hung with thick, white curtains. Within are living chambers, a library of invisible books (seven volumes, mostly concerning the magic of teleportation, but also a few travelogues of the dimensions) and a laboratory. Several rooms hold bizarre, alien animals in cages – mostly avians of many kinds, including a fairly enraged mi-go in temporal stasis.

Mikelroy has one apprentice, a bestial young woman with a flat nose and flared nostrils, a beetling brow, large, brown eyes, floppy, pointed ears and vestigial horns. Mikelroy will introduce her as Pencella, whom he rescued from a labyrinth.

Mikelroy is a pleasant sort, but distant and overly flashy. He is especially interested in finding a way into the dungeon in [1339].

1041. A pleasant shoal of white sand stretches almost a mile into the sea here. Though often submerged, at low tide it can be traversed, and one might spot a gleaming statue at its furthest point. The statue is studded with glistening white shells, and appears to be a woman, her arms thrown back, her shoulders forward, her eyes fixed on the horizon. The statue was constructed at some point in time by sea folk, and is an idol of Calypso, a nereid and minor goddess of death. By night, the waters around the idol are thick with enticing asrai.

1105. A wily old kelp dragon, the remains of the honorable Yostifrix, haunts these waters, always on the prowl for a wayward barge of revelers to be overturned and devoured. The dragon’s bed contains three large, rusty chests containing 2,470 sp, 1,200 gp and a large, jagged sard worth 10,000 gp.

1118. The orc warlord Gorthruk has established a permanent camp here. The camp is built atop a tall, flat hill and consists of a wooden palisade and two tall, wooden watch towers. Gorthruk has worked for the hobgoblins of the Klarkash Mountains in the past, but now has set his sights on conquering Blackpoort. Gorthruk controls 700 orcs and has sent emissaries to the orcs of the central hills to secure an alliance. His warbands patrol the area around this hex constantly, and are encountered on a roll of 1-3 on 1d6.