The Wonders of the Mountain 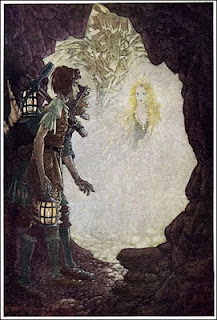 Here's a nice piece of prose by George MacDonald from his story The Princess and the Curdie.

"All this outside the mountain! But the inside, who shall tell what lies there? Caverns of awfullest solitude, their walls miles thick, sparkling with ores of gold or silver, copper or iron, tin or mercury, studded perhaps with precious stones - perhaps a brook, with eyeless fish in it, running, running ceaselessly, cold and babbling, through banks crusted with carbuncles and golden topazes, or over a gravel of which some of the stones arc rubies and emeralds, perhaps diamonds and sapphires - who can tell? - and whoever can't tell is free to think - all waiting to flash, waiting for millions of ages - ever since the earth flew off from the sun, a great blot of fire, and began to cool.

Then there are caverns full of water, numbingly cold, fiercely hot - hotter than any boiling water. From some of these the water cannot get out, and from others it runs in channels as the blood in the body: little veins bring it down from the ice above into the great caverns of the mountain's heart, whence the arteries let it out again, gushing in pipes and clefts and ducts of all shapes and kinds, through and through its bulk, until it springs newborn to the light, and rushes down the Mountainside in torrents, and down the valleys in rivers - down, down, rejoicing, to the mighty lungs of the world, that is the sea, where it is tossed in storms and cyclones, heaved up in billows, twisted in waterspouts, dashed to mist upon rocks, beaten by millions of tails, and breathed by millions of gills, whence at last, melted into vapour by the sun, it is lifted up pure into the air, and borne by the servant winds back to the mountaintops and the snow, the solid ice, and the molten stream."