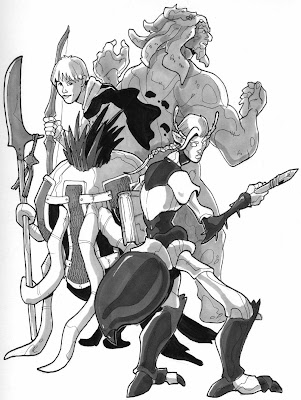 So, the old band got together last night to do a play test of PARS FORTUNA. It was fun, and generally I was happy with the results. A few take aways:

1. The olvugai (the tentacled critter to the right) was the belle of the ball. Dubbed "the potato", he was the focus of most of the one-liners, i.e. pushing into the middle of a band of nizzertits (the kobolds of Pars Fortuna) so that he could attack to the front and back was termed a "classic potato maneuver", the olvugai's heavy armor was described as tin foil, "of the nizzertits show up with sour cream and chives, watch out", "hand me my angry eyes", etc.

2. Pars Fortuna is definite old school and my group is not really old school - the lack of combat bonuses for the warriors at first level (or second level) took a few people by surprise, and despite a gentle nudge, henchmen were rejected. Of course, henchmen were sounding better after the first TPK.

3. Oh yeah - I needed to adjust the wandering monster numbers - a large group of wandering nizzertits caused the TPK, and a later band of wandering osks came close to pulling a second. Easy adjustment.

4. The combat system worked very well, and everybody liked it. I was especially pleased with that. The special maneuvers system was also well liked (i.e. declare a special attack, make your roll at -2 to hit, if you hit AC normally, you do damage, if you beat AC by 4 or more, you do your special maneuver).

5. Tweaking the magic system a little, primarily in the random consequences of trying to cast more spells than normally allowed.

So, a few tweaks, but nothing too major. The other happy news is that I finished writing the last 24 magic items today. The game rules are now finished - 12 new race/classes, 100 new monsters, 120 new magic items, 100 converted spells new to Old School gaming and alternate rules for spell casting, combat procedures and weapons and armor. Now I just need to do a bit more editing, write a quick sample dungeon level and small wilderness hexcrawl and do an appendix with some conversion notes for other old school games, and PARS FORTUNA is ready to be published
Posted by John Matthew Stater at 8:48 PM