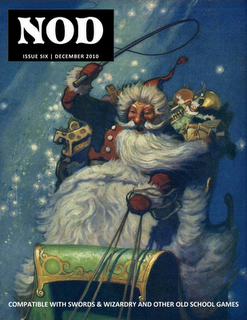 Yes - NOD 6 is ready to download, but not to purchase in print. Yet. I'm telling you what - I'm so frustrated right now, I don't know what to do with myself. Just one problem after another. I put all my documents together in Word and then convert to PDF. This is a major pain in the butt, but I'm not exactly running a business here, and Word is what I've got, so Word is what I use. Anyways - there are so many hassles involved with going Word to PDF - you have to physically (digitally?) embed all the fonts, many of which are "hidden", so I have to add invisible characters to a document so I can find them and embed them, PNGs look like crap when you convert to PDF, so I have to use BMP and JPG, and this time around they look like crap as well, which in itself is immensely annoying when you work your butt off to create a nice looking document. So I do my conversions after hours at work because I have the full Adobe suite there, get home to make the actual Print-On-Demand thing at Lulu and discover that the document has an un-embedded font in it - Arial Bold Italic. Yes, the arial and times new roman fonts, which do not actually appear in the document (well, arial does in the OGL) will not self embed - pretty much every other font will, but not the TWO MOST BASIC FONTS KNOWN TO MANKIND!!! Aaaahhhhh!!! So, long story short - nothing to purchase tonight, but the e-book for NOD 6 is a free download as my holiday gift to the gaming community that has helped make my dream of being a writer/publisher come true. So, while I go outside and punch a tree for a couple hours, please enjoy the fruits of my labors in their slightly mangled form courtesy of Adobe and Microsoft, my two best friends and two worst enemies tonight.

NOD in 2011
Well, my fervent hope is that I can sell some ad space in the magazine next year and make the PDF downloads free. I'm charging $2 for quarter page ads, $4 for half page ads and $8 for full page ads. My last free issue, NOD 1, has been downloaded between 750 and 800 times, so the exposure to the old school community should be pretty good for the money you spend. My email address is in my profile, so send me an email if you're interested. If there isn't enough interest in ad space, I'll just keeping doing like I've been doing - around $10 for print, $3.50 for e-books.

NOD 7 in February will feature three city-states - Lyonesse, Antigoon and Blackpoort - in the same format I've done with Ibis and Ophir. Knights and dames and merchant princes and thieves and assassins and troll bridges, pigeon pie - something for everybody!

NOD 8 in April is slated to feature JD Jarvis' MutantFront. First guest contributor, and I'm very excited to see what he comes up with. Art will be commissioned for this one, and it will be chock full of mutated Great War goodness! Check out Aeons & Auguries for more MutantFront goodness.

NOD 9 in June will launch some coverage of Mu-Pan, the realms of the Dragon Kings. I've been done some pseudo-European and pseudo-Arabian material with Venatia and the Wyvern Coast/Nabu material, and now I feel like dipping my toes into Asian myth and folklore. It's also a great excuse to use some of great material in Ruins & Ronin, Mike Davison's take on Asian adventures for Swords & Wizardry. NOD 10 in August will continue with Mu-Pan.

NOD 11 in October is slated to feature another guest contributor - my good friend Luke DeGraw. Luke worked up some conversions of Castles & Crusades for playing Robotech, and he's going to put together something that involves no challenges to legal copyrights or intellectual property, but does involve old school rules and giant freakin' robots. Should be awesome.

And back to December and NOD 12, where I'll feature a city of Mu-Pan and God only knows what else. Hey - I'm amazed I've thought this far ahead! Hopefully I'll throw some support for PARS FORTUNA and Mystery Men! in there along the way, and if anyone else wants to contribute something, let me know! Oh - and look for Hexcrawl Classics from Frog God Games - I wrote 'em. They're hexcrawls (yes, not just a clever name) without a setting, though I'm kinda sorta inventing one as I go. The maps are based on locations in North America, so Huzzah!s will be awarded if you can guess the locations.

So, until tomorrow when I've had time to fix my #$%@#$@ PDF and post NOD 6 for sale - enjoy the free download and keep on gaming!
Posted by John Matthew Stater at 9:43 PM