Random Musing - The March of Progress in a Campaign World 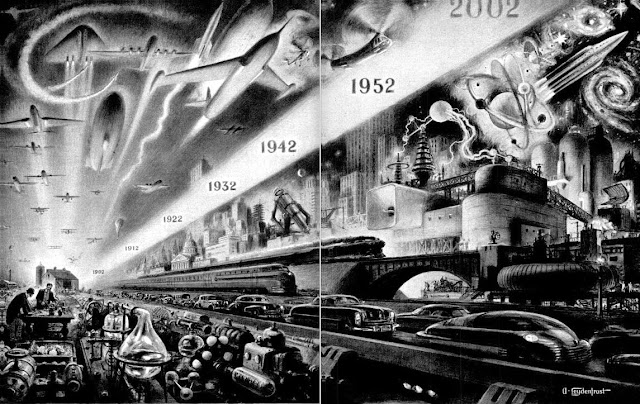 This notion just struck me a few moments ago, so I figured I'd put it down on pixel while it was fresh in my mind. I was thinking about the transition of a medieval-style fantasy campaign world, my own in fact, to a Renaissance level of technology and society - nation states, masses of firearm-armed men-at-arms, printing presses - and then to higher levels of advancement - the Victorian Age, etc. Invention in most fantasy game rules, at least in terms of invention by PCs,  is relegated to the creation of new spells. Naturally, a Referee's NPCs can invent anything they want, but if we assume that everybody in the world uses the same spell creation rules, the more high level magic-users there are, the more spells will be invented. In my own world, I have the Scientist class, so the same concept would hold in NOD for pseudo-scientific inventions. Therefore - while invention in our world has generally relied on the strength of civilizations and their ability to share information and amass resources, the march of progress in a fantasy world would rely on the existence of powerful monsters and hidden treasures - the very things that provide experience points for adventuring magic-users and scientists. Now, again, I know that NPCs aren't shackled by the same rules as PCs in most old school fantasy, but bear with me - this is just a matter of a guy following an idea around to see where it goes. So, if we take the necessity of powerful monsters as the basis for invention, as a campaign world's PCs gradually whittle down the powerful adversaries, the pace of new inventions should slow down. As civilization expands in a campaign world, invention slows down - an interesting concept.

It also occurs to me that as all those high level and mid-level monsters - the more unique sorts that don't multiply like rabbits (or goblins) - are killed off and as large treasures are discovered, the ability of any PC to advance in level becomes restricted. Once you get past the lower levels, not being able to take out mid-level monsters means getting through those mid-levels becomes much harder, and it makes those few powerful monsters that avoided the old high-level PCs more secure. Maybe the natural evolution of a fantasy world would be:

Once you enter stage 3, the likelihood of powerful monsters laying waste to civilization might be pretty high, sending the fantasy world back to stage one and setting the scene for all these old school campaigns where low-tech civilizations always seem to be built on the ruins of ancient high-tech civilizations.