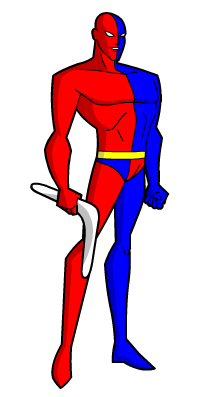 Here's what I'm thinking - a multi-city, multi-villain plot to do something horrendous. Just about as many people as want to can play. Either pick a public domain character or make an original up and stat him or her up with 50,000 XP. Game is set in a pseudo-Silver Age of comics in the Shore City Universe from the rulebook.

The game will be played on Google+. I'll set up groups based on the city in which each character operates, throw out messages to that "city" in turns, allowing every hero in that city to respond to that message, and then moving on to the next turn. I'll roll all the dice, of course.

As characters move about, their players are added to different cities, until everything culminates in the final, big scene.

If you want to participate, send me an email or comment on this post and I'll invite you to Google + (unless you're already there). It may take a few weeks for me to get everything plotted and underway, and I have no idea how long it will take to run the campaign. The rules, as you should know, are available as a free PDF.

EDIT - Welcome to readers of Project Rooftop! This is actually a somewhat older post that they linked to. The game is actually long out of beta testing and is available for sale as a book and as a free PDF at Lulu.com - this post refers to a campaign I am currently running on Google +. Unfortunately, that game is full at the moment, but since it seems to be going well, I will probably run another campaign in the future. In the meantime, you can click HERE to get a better idea of what Mystery Men! is all about.

Image is the golden age Daredevil made by my daughter using Fabrica de Herois, which has become a bit of an obsession for my daughter and I - many more pictures to come.
Posted by John Matthew Stater at 4:49 PM