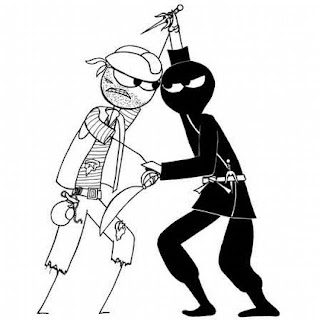 Busy weekend, but a good one. I finished my fifth Hex Crawl Chronicle - The Pirate Coast - and just need to send it along to the good people at Frog God Games. Next up is The Troll Hills, in which I try to incorporate every version of troll I can. If you have an OGL troll you'd like stuck into those very dangerous hills, let me know.

Oh - for that matter - the Tome of Horrors Complete is now available. I have scads of lairs in that tome and did the conversions of the monsters from Tome 1.

I'm about 1 week away from publishing NOD 10. Contents should be ...

Mu-Pan - continuation of the hex crawl in NOD 8. I've been running excerpts all month.

Polyester Road - this is a mini-game/mini-campaign about truckers hauling goods on post-apocalyptic highways. The technology is mid-1970's and the mutations not too gonzo.

Monstrous Evolutions - two race/classes for Pars Fortuna in the tradition of beast-people. In this case, the "beasts" are a rust monster and owl bear. Will include an illustration and a mini-adventure.

Chim-Chimera-Cheree - The random chimera generator I posted on this blog with a nice illustration.

The Leech - A fantasy doctor/surgeon class for Swords and Wizardry - think of this class as the medical equivalent of Indiana Jones' archaeologist.

Phantastes - a few more chapters of the fantasy classic.

Coming up for NOD 11 - A journey into Hell (hex crawl inspired by Dante's vision of the underworld), Action X (mini-game of special operations teams in the Cold War) and probably something spooky for Halloween - probably a dungeon crawl in a haunted manor.

And now, two encounters - one from Mu-Pan, the other from the Pirate Coast. Enjoy ...


0108. The floor of this valley is a chain of shallow lakes linked by channels of sandy, sluggish streams. The lakes are heated geo-thermally, and this has made the valley steamy and verdant. In ages past, great creatures akin to reptiles lived in the valley until they were hunted to extinction by the ancient elves – many an old elven sword has a pommel wrapped in leather cured from their skin and ancient elf lodges often have their strange, massive heads mounted on the walls.

While these massive beasts no longer roam the valley, their spirits do, and are encountered here on a roll of 1-2 on 1d6 (1-4 on 1d6 during a full moon). Use the following table to determine what kind of animal is encountered.

The dinosaur spirits are ethereal, and can thus only be harmed by silver or magical weapons and spells of force or dispelling. Their attacks cause 2d6 points of chilling cold damage and force a victim to save or be drained of one level.

One of the shallow lakes is an illusion, hiding an ivory palace of the ancient elves – one that has been abandoned and forgotten for centuries. The palace is composed of eighty-one cells, each with a vaulted ceiling and connected to four adjacent vaults via a short (5 feet long) passage. These passages are blocked by walls of force, each one a shimmering curtain of one of five colors – cerise, ultramarine, gamboge, myrtle and heliotrope.

The palace has four entrances; each of these entrance cells has only three curtains for force blocking further access to the palace. One of these entrance cells contains a colored tetrahedron of metal, the exact color being determined randomly (see below). In the middle of each cell there is a tripedal stand which fits this tetrahedron. By placing the tetrahedron in the base and tapping it with something metallic, the corresponding colored curtain of force disappears for 1 minute. The colors of the curtains in each cell should be determined randomly with a d10 (1-2 = cerise, 3-4 = ultramarine; 5-6 = gamboge; 7-8 = myrtle; 9-10 = heliotrope), and the color of the tetrahedron changes (using the same random table) when it is brought into a new cell. This makes moving through the strange palace quite a chore, and potentially dangerous as there is a slight chance one will enter a cell and be unable to exit due to the color of the tetrahedron.

Each time a cell is entered, there is a 1 in 1d6 chance of a random monster (CL 3) appearing in the cell. These monsters are given the same random colors as the rooms and tetrahedron, and the color of the creature makes it vulnerable to a single form of attack: Cerise = cold, Ultramarine = fire; Gamboge = silver; Myrtle = steel and Heliotrope = wood. All of these beasts can be harmed by magic missiles. Their bodies disappear after one leaves their cell.

Looking upon a plate not attuned to their class forces a character to save vs. blindess. Looking upon the proper plate grants a magic-user a new spell of their highest spell level (though it must be written into their spellbook), a cleric or druid access to a magic-user spell that can be associated with their deity, a fighter-type a +1 bonus to wield a random weapon and a thief-type a +10% bonus to use one of their skills.

7238. Dinsan: Dinsan is a city of 6,000 people situated atop a plateau that rises 200 feet above the surrounding landscape and looks over the source of the river. The city is quite ancient and the buildings show their age. Although the people are productive, growing sweet, golden barriers (sun berries) and turning them into a very potent liqueur favored by the Ying nobility.

The city is notable for seven grand constructions. The first is a central tower with a single, large wooden gate. This tower is the entrance to the plateau, as it connects with a tunnel that spirals up through the plateau. This tunnel is guarded by albino apes chained to the walls. The roof of the tower is conical and set with six mirrors. As the sun hits these mirrors, it sends a beam of light to strike the face of one of the six statues.

The six statues represent the six founders of the city. Each of the founders is represented by a faction in the city, and while the face of a faction’s founder is illuminated, that faction governs the city absolutely. This makes for rather confused government, though the locals are fairly used to the arrangement and almost take pride in it.

The first faction was founded by Binua, a priestess of Inzana. Her sohei are now commanded by Temang, a muscular woman with a round face and long grey hair. The sohei wear armor lacquered red and brass masks meant to depict Inzana, the sun maiden. The sohei are warlike and easily annoyed, and demand almost constant tribute to their goddess and her sacred monkeys.

The second faction are the samurai descended from the army of Chireng and now ruled by Agchaan. Agchaan is a straight-forward, brash woman with fiery green eyes. Agchaan is big boned and has a small-featured face. She and her samurai rule with wisdom and restraint, following the bushido code zealously.

The third faction are the shugenja of the White Order, a band of moralists who outlaw alcohol, gambling and promiscuous behavior while they are in charge. They are all ascetics who wear simple white loincloths and who anoint their bodies with the oil of stinging herbs. The White Order was founded by Manalch and governed by Haampi, a small man with a thin face and sunken eyes.

The fourth faction are the ninja of Geri, the so-called Jade Prosperity Society. The ninja are a crime syndicate of smugglers and assassins who run protection rackets even when they are not in power. The ninja are ruled by Uncle Take, a secretive man, tall, with a long face, who runs a shop of calligraphers and keeps white mice.

The fifth faction are the wushen of Geran, a monkey hengeyokai who preached the values of laughter and festivities. The city takes on a Mardi-Gras atmosphere while the monkey lords are in power (though not all of them are monkey hengeyokai). The wushen are governed, loosely, by their eldest member, Mudar. Mudar is a willowy men with a heart-shaped face. He and his priests dress in silk tunics and pantaloons, carry staves and wear monkey masks.

The sixth factions are the descendants of the slaves who constructed the city-state and the tunnel through the plateau. They are no longer slaves, and most of the time work on repairing buildings and constructing new buildings. When they are in power, however, they run rampant through the city destroying the work they had done and causing new destruction – though never to the houses of the other factions or the central tower. They are led by the half-ogre Suhaz.