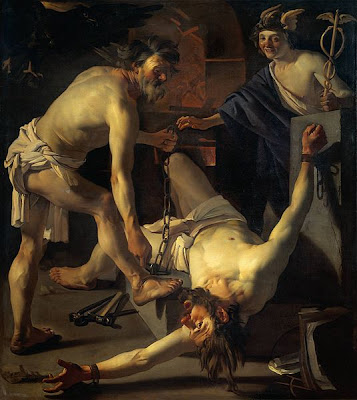 Another preview - maybe the last before the release of NOD 11. I'm going to try to finish the first Hell hex crawl installment this weekend and publish sometime next week. I think the schedule will be ...

I think it's safe to say that by NOD 15, I'll be sick and tired of writing about Hell.

In the meantime - here's the preview material ...

15.39 Aella: This windy hex holds the stronghold of Aella, titaness of whirlwinds, daughter of Khaos. Aella’s barony is always windy, with the direction of the wind shifting substantially from moment to moment and whirlwinds forming each hour on a roll of 1 on 1d4 (treat as an air elemental’s whirlwind power).

In the midst of these winds there is a great dome of tarnished gold. The dome is pierced by a grand gatehouse of white marble with towers 60 feet tall and inner and outer portcullises. The gatehouse and dome are defended by 15 companies of sinister bronze men, who pour molten bronze upon people from murder holes in the gatehouse (6d6 damage, save for half) and 5 squadrons of harpies, who pepper invaders with arrows and sing their terrible songs.

Aella is lithe and graceful, but her green eyes have a malevolent cast and her red hair is wild and unkempt. Her skin is the color of a crimson sunset and her frame is encased in mithral platemail. She carries a massive glaive. Her treasure includes 3,920 gp, 740 pp and a silver idol in a copper basin (worth 14,000 gp) that depicts her father.

18.28 Mount Kippat: Kippat is a lonely mountain that towers over the surrounding savannah. Plumes of white and yellow smoke pour out of crevices near the base (climbers must save vs. poison or fall unconscious and fall for 6d6 points of damage). The cracks and crevices of the mountain are inhabited by a tribe (really multiple families) of 400 goblins. The crevices are anywhere from 10 to 30 feet deep, and the bottoms have been hollowed out by the goblins, who sought both a place to live and the green garnets that abound here. Over time, the goblins tunneled deep into the mountain, discovering that the deeper one went, the larger the garnets became until they finally coalesced into a single garnet about 20 feet in diameter at the very center of the mountain. A bizarre creature appears to exist in the heart of the garnet. The garnet’s great size and faceted nature makes it difficult to discern just what it hides, but it is clearly evil and the garnets of its mountain seem to carry with them a taint to this mother garnet.

66.9 Water Bridge: A powerful gout of water emerges from the ground here and arcs into the distance, well past the horizon. One can step into the rushing water and, if they can hold their breath for 10 rounds or fight the current enough to keep their head out of water (requires an open doors roll each round) they are delivered across the hex, suffering only 3d6 points of damage for the journey.

Unfortunately, the plume of water plunges back into the ground at the end of its journey, depositing the adventurer in a series of partially submerged limestone caverns crawling with giant centipedes, green slimes and other monstrosities. It is impossible to “swim” back up the flowing water and the limestone caves seem to climb ever downward, with waterfalls and submerged tunnels all the way. At the bottom of the caves there is a sickly titan chained to the cavern walls. The titan looks pale, its eyes rheumy and its lips lank and parched despite the moisture of the caverns.

The titan, Felix, is the son of Anatole, goddess of the sunrise and Sors, the god of luck. He was locked away, hidden from the Sun, as a means of tormenting his mother. His chains are semi-ethereal and pass through his wrists and ankles. They keep him weak and prevent him from using his magical powers. If freed, he would be a target for every demon and devil in Hell, but he would be a powerful ally for a time and a great help in escaping Hell.

Yeah, the titans were built with the help of THIS.
Posted by John Matthew Stater at 11:31 AM