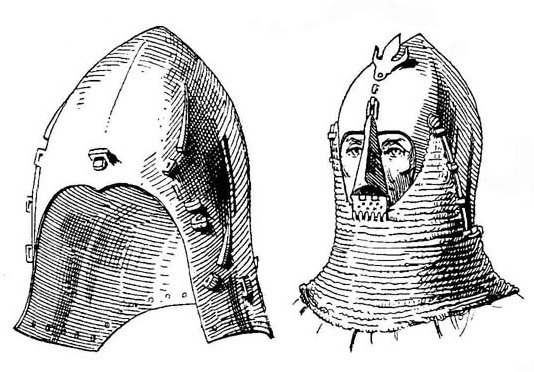 Dual helms are constructed in pairs and are connected to one another through subtle strings of being that float through the ether.

Gemini Helms
When little used, Gemini helms allow the two wearers to swap abilities. One category of ability can be swapped at a time for up to 1 hour in a 24 hour period. These categories are as follows: fighting ability (i.e. attack bonus), strength, intelligence, wisdom, constitution, dexterity, charisma, hit points (damage stays with the person damaged, though, so a person who normally has but 20 hit points and swaps it with his comrades 50 hit points will die when the switch it over if he's taken more than 19 points of damage), saving throws (all categories, if applicable), prepared/memorized spells and spell casting ability and special abilities (i.e. a thief could swap his special thief abilities for a ranger's special ranger abilities).

Each time a pair of people use the helms, there is a cumulative 1% chance of a feedback, up to a maximum chance of 12%. If a feedback occurs, consult the following table:

7-9. Personality Swap: This could also count as an alignment swap.

Puppet Helms
Each of these helms acts as a helm of telepathy. It also gives its wearer the ability to impose his will on the wearer of the other puppet helm. When this battle of wills occurs, both players should roll 1d20. Whichever rolls the furthest under their charisma score wins the battle and can force their companion to do or say one thing that takes no more than 1 turn (10 minutes). The winner of this contest of wills suffers 1d3 points of charisma damage, the charisma damage disappearing after 8 hours of sleep.

Helms of Summoning
The wearer of one of these helms can remove it, strike it with a small platinum rod and say "Come Hither!" and their comrade appears beneath the helm (and no, not if you're holding it over the edge of a cliff or under water - don't be a pain in the ass). The other helm appears on the summoner's head when his comrade appears. These helms can be used once per day, but with each use there is a cumulative 1% chance that the summoned comrade will actually be their double from another reality. This chance re-sets at the next full moon. If an alternate comrade appears, use the following table to determine what shows up:

ROLL D6
1. Zombie: Retains a feral intellect, thoroughly chaotic. Fights with as many Hit Dice as the person had levels, but loses any special abilities. Those who lose more than half their hit points to the zombie's attacks must pass a saving throw or become a zombie themselves. Remove disease cures them, but only inflicts 1d6 points of damage per caster level to the summoned zombie.

2. Demonic: Has the abilities of the person summoned (or the reverse, if they were a cleric or paladin), but with a demonic cast and a chaotic alignment. The summoned demon is immune to fire and mind reading and has bat wings that give it a flight speed of 12.

3. Hulk: Summoned person is much larger than normal, with double the strength (or strength bonus, to keep it simple) and an intellect of 1d4+2. Might start calling the summoner "George" and develop a strange fascination with small, furry mammals.

4. Reverse Gender: Summoned person is of the opposite gender. All abilities stay the same, but personality might be slightly altered.

5. Evil Twin: Appears to be the person summoned, but is secretly chaotic and smart enough to realize the situation and use it to their advantage. If the summoned person was chaotic, the evil twin will attempt to kill and replace his or her double. If male, will eventually grow a goatee.