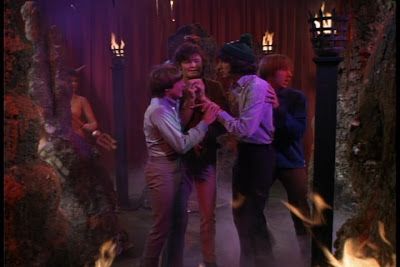 9.51. Halflings: Far from the salt-of-the-earth, pleasant folk of the world above, the halflings of hell are bestial little fiends who delight in the torment of others, and especially of things larger than they are. They are the sum of all the fears and jealousies that infect their kin who dwell in the sunlight. These particular halflings dwell in the branches of a wood of thorny trees that covers most of this hex. The trees grow in clumps and have a bark that can be pulped and turned into a mild poison that they rub on their barbed whips. This poison adds +1 to the damage inflicted by the whips and raises especially large and uncomfortable welts on the skin (-2 effective dexterity for 24 hours).

The halflings dress in bark cloth and lurk in the branches, preparing to ambush travelers with their barbed nets. People captured are tortured to death (suffer 1d3 points of constitution damage each day until they die). The halflings then attempt to capture their shades with their nets when they appear. The shades of lawful and neutral creatures are especially valuable in Hell, but hard to hold onto.

The halflings live in small, clannish groups of about 1d10+20 individuals. There are twenty such groups in this hex and they are encountered on a roll of 1-2 on 1d6.

10.47. Traveling Salesman: The master of Hell has a soft spot in its heart for salesmen, and they are welcomed as honored guests in its myriad rings. One of the best is a man called Kharvel, a huckster extraordinary whose crooked dealings landed him in Hell after he died. He was granted his memories and his old body by the powers-that-be and now roams Asphodel atop a great achaierai he calls Tripoli. From here he sells all manner of goods stolen and traded for, including random potions (one in six is cursed to have the opposite effect and one in twelve of those is cursed to be permanent), maps (one in six is genuine), amulets (all fake), and other odds and ends.

Despite his dishonest nature, Kharvel is actually a good source of rumors and information about the netherworld, though he charges a high price for information. He looks like a well-proportioned, rugged man with golden skin, a balding pate and a devilish beard and mustache. He wears a white tunic and cloak, worn sandals and a leather belt that holds a curved sword, several pouches and pipes of the sewer. These pipes summon shadow rats instead of the normal, mortal variety.

11.46. Ruined Fortress: While the lords of Hell may appear to be eternal and everlasting, they are as mutable, in a way, as humanity. Demons are creatures of spirit and thus immortal, but they can be reduced in stature by their peers and mortal challengers. Such was the fate of Pashatiel, a demon of doorways and beginnings and endings who deigned challenge the power of Flavros and was duly defeated and demoted.
Pashatiel’s fortress was constructed of iron blocks welded together. The fortress had two layers of walls – an outer wall 25 feet tall with 11 towers standing 30 feet tall, and an inner wall 30 feet tall with 8 towers standing 35 feet tall. The place is without windows. The top of the towers are shaped like the pretty, outstretched hands of a maiden.

The fortress is now empty. The demons who died here fighting the army of Flavros have melted away into the landscape. Weapons and armor, including hundreds of arrows that retain their poisoned tips, are scattered about the place, many atop black stains on the walls and floor that have a vaguely humanoid shape.

The interior of the fortress is clad in ivory-colored marble that is very clean and very smooth. Hallways, doorways and archways abound in this weird, quiet place, with actual chambers being few and far between. When people pass through the archways and doorways, they feel a tickle on the back of their neck, as though something is watching them and has made a note of their arrival. The interior is like a maze, and there is but a 2 in 6 chance per round (3 in 6 for elves, 4 in 6 for dwarves) of making any real progress.

The only chamber of note in the fortress is the inner sanctum, a sort of circular great hall at the heart of the place containing a throne atop a circular dais. Sprawled on this throne is Pashatiel, who in life took the form of a short, graceful man with deep wrinkles on his bronze-colored face, wide, gray, catlike eyes and long, straight, night-black hair. His appearance is now ashen and indistinct – like a shadow rather than a demon lord. Pashatiel is now a prisoner of his fortress – reduced in stature to a mere shadow demon.

Pashatiel inhabits the walls, floors and ceilings of his fortress, with the dais being the focus of his spirit and power. He can, with a thought, disappear from the dais and re-emerge from any wall, floor or ceiling. He can also command 2d4 shadows or 1d4 allips to arise from the black stains on the walls and floors.

If defeated as a shadow demon, Pashatiel sinks into the ground and re-emerges some time later as a mere lemure. Beneath the dais, which weighs 3 tons, there is a hidden treasure cache containing 1,250 gp and 400 sp.

Image from HERE. From the Monkees episode The Devil and Peter Tork - I wanted one of the devil as salesman, but I got this instead.
Posted by John Matthew Stater at 8:41 AM