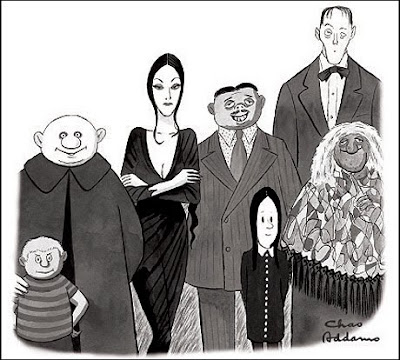 Once upon a time, the story goes, the fey retreated before the unstoppable spread humanity into the kingdom of Faery, rarely to be seen again. This, of course, is utter rot. Oh, the elves sometimes slip between the dimensions and travel through time as their magic allows, but most of the fey stayed put, learning to blend in and live among, though usually separate from, humans. The elves remained beautiful, of course, and the goblins weird and macabre, and they can be found today as members of a few weird families throughout the world, rarely intermarrying with humankind and otherwise enjoying themselves as best they can in a world that fears them.

The Macabre
The macabre are humanoids (well, mostly) who are, to a man and woman, unwholesome, or at least odd, in appearance. They are possessed of a dark humor and a glee that sometimes runs to the murderous. Encountered outside their close knit clans, the macabre refer to themselves as uncle, aunt, cousin or even grandmother or grandfather, indicating their race’s kinship to mankind. They call themselves by names profane, morbid or macabre.

The macabre are possessed of strange powers. All of them have rather special powers of regeneration, healing at double the normal human rate (i.e. 2 hp per day). Macabres can see in the dark up to 120 feet. Each one has an additional extraordinary ability rolled on the following table:

1. Startling strength (can boost their strength once per day per gauntlets of ogre strength)
2. Half damage from fire
3. Half damage from acid
4. Half damage from electricity
5. +3 bonus to save vs. poison
6. +3 bonus to save vs. disease
7. Menagerie (commands a swarm of spiders, a pack of six giant rats or a single vulture, lion or octopus)
8. Witch or warlock (cast prestidigitation three times per day)
9. Has an assassin vine as a boon companion
10. Has an old crawler (a disembodied human hand) as a boon companion
11. Swordsman (+1 to hit with swords and -1 [+1] Armor Class while fighting with a sword)
12. Explosives (can mix and set off explosives without harming himself)
13. Inhumanly tall (-1 to dexterity, +1 to strength)
14. Inhumanly short (-3 to movement, +1 to strength)
15. Inhumanly fat (-3 to movement, +1 to constitution)
16. Inhumanly thin (-1 to constitution, +1 to dexterity)
17. Raucous cackle (once per day, all within earshot must save vs. fear or flee for 1d6 rounds)
18. Regenerate 1 hp per round up to half normal hit points unless reduced to 0 hit points
19. Covered in thick hair (-1 [+1] to Armor Class)
20. Tunneler (has a burrowing speed of 6)

Macabres can advance as fighting-men up to 7th level, magic-users up to 5th level and as thieves with no level limit.