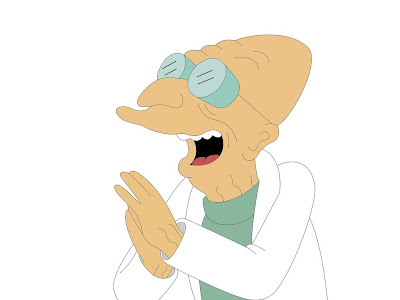 The esteemed Jason Sholtis is now working on illustrations for Space Princess, so the game's release is imminent. To keep the atomic fires of excitement for this game stoked, I thought I'd provide a sampling of the super science that scientists in the game can build, provided they have the skill and resources.

Super Science
Super Science is our name for high-tech equipment. The following list of super science is not exhaustive, and Referees and the players of scientist characters should feel to invent new items.

The name of each item is followed by a number in parentheses. This number is the test value for a scientist’s skill test when trying to fabricate the item.

Electro-Scrambler (TV 20): An electro-scrambler can be used to disrupt the electric brains of robots, androids and gynoids. The effectiveness of an electro-scrambler depends on the skill level of the scientist who created it. When used, consult the following table:

Find the skill level of the inventor and then cross reference the number of Hit Dice of the robot. The resulting percentage is the chance that the electro-scrambler works. When unleashed, an electro-scrambler affects all robots, androids and gynoids in a 30-ft radius unless they have specifically been given immunity by the inventor of the device (i.e. a scientist can choose to make the androids and gynoids that are his allies immune to his electro-scrambler). Making these modifications costs five Science Points per android, gynoid, or robot so modified.

Robots that are affected must flee (usually while bleeping loudly and smoking) for 1d6+1 rounds in the opposite direction. If they cannot flee, they simply walk repeatedly into a wall. If attacked while affected by an electro-scrambler, a robot goes berserk, fighting back with a +2 bonus to hit. Androids and gynoids receive a Mentality test to ignore the effects of an electro-scrambler.

Force Screen (TV 10): A force screen is usually projected from a belt or other small piece of equipment attached to a person’s clothing. The force screen grants a +2 bonus to DEFENSE against missile attacks. It can be used for 10 rounds of combat before needing a recharge.

Invizo-Screen (TV 20): An invizo-screen emanates from a helmet worn on the head, making the person completely invisible for up to 10 rounds before it must be recharged. An invisible person has their Defense Rating increased by 10 if they do not attacks, and increased by 5 if they do attack in combat. Invisible people can still be heard, felt and smelled.

Medi-Kit (TV 10): A medi-kit is a small box that can dispense chemicals that heal wounds (+2d6 hit points) and neutralize poisons. A medi-kit can be used 6 times before its chemical stores must be replenished.

Mento-Helmet (TV 20): A mento-helmet amplified a person’s natural brain waves and performance. It grants a +2 bonus to mentality tests and gives a person the ESP ability of mystics. The mento-helmet can be used 10 times before needing a recharge.

Ray Gun – Basic (TV 10): A basic ray gun fires rays of energy. Ray guns can be used 10 times before they must be recharged. All ray guns have a range of 30 paces.

Space Suit (TV 10): A space suit allows a person to survive in a vacuum for 1 hour before its oxygen supply must be replenished. It consists of an air-tight suit of plastic and rubber, a glass helmet and oxygen tanks that can either be external or worked into the lining of the suit.

Image found HERE.
Posted by John Matthew Stater at 9:34 AM