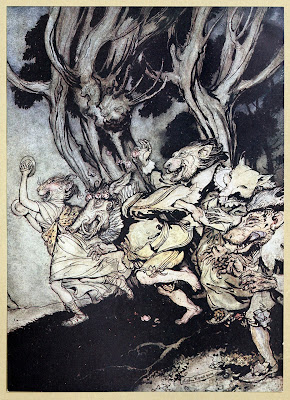 I've posted about this kind of thing before, but now I'm starting to visualize how I want to format my sandboxes in future issues of NOD and future blog previews. My main concern is making the information 1) useful for a Referee during actual play and 2) flavorful and unique enough to keep players interested or fire the imagination of the Referee so he or she can keep players interested. With that in mind, here's how I might format future sandbox presentations ...

REGION NAME
• Description of the area; where does it fit in with other maps
• History of the area – very basic
o Pandiluvian Period
o Golden Age
o Modern Age
• [Basic map showing the regions and naming them, along with stars for city-states and dots for towns]
• [Smaller map showing where this region fits into the larger world map]
• [Welcome to NOD sidebar – quick description of the campaign world and what has appeared before]

• List major dungeons, along with rumors regarding those dungeons

• List major dungeons, along with rumors regarding those dungeons

Dangers
• Random encounter tables for the different regions - one table using 1d12; go from weak to strong, so when the Ref rolls a "12" he knows he should chuckle wickedly
• Discuss No. Appearing formula, when to roll, how often to roll, etc.

Tribes
• Picture (head shot - maybe no picture, see how this one goes) of major humanoid types (including berserkers, men-at-arms typical for the region); for each a brief societal description (mostly as pertains to game play), armor and weapons; show hexes where they appear; give tribal treasure guides – coins, art, livestock, magic – main idea is to help make the goblins of Region X distinct (at least a little bit) from the goblins of Region Y
o Give stats for sub-chiefs/sergeants (+2 HD) and chiefs/captains (+4 HD) along with stats for the basic monster type
• Discuss concept of tribal spell-casters (with a basic statblock for level 3, level 5 and level 7)
• Note – Humanoid leaders and spell-casters that have class levels are described in detail in the text
• Give three map templates for different types of lairs – these will change from issue to issue, but always remain basic; label the chambers rather than number them
o Cave Lairs
o Village/Forts
o Camps

Keyed Encounters
• List all of the keyed encounter areas:
o Set-Up (describe the place, the people, etc)
o Twist (why should anyone care)
o Reward (not just treasure, also information, captives to free, XP for discovering)
• For towns and city-states, do sidebars like I do for official city-state write-ups
o Include a little map, very basic, with maybe 3 locations that are quickly described or maybe just given descriptive names
• For “dungeons”, have a black and white map with chambers that are described on the map (“Orc guards with flame throwers”, “slime lake”, maybe a little drawing for fun) and leave rest to the Referee to flesh out [I might not go with this idea - I need to test it out]

Walled village of 100 cantankerous diamond miners ruled by Bob, a flatulent mayor with red hair and green eyes and five lovely daughters. The village has a popular roadhouse run by Beth, a swarthy beauty with a missing eye, that rents private rooms for 5 gp a night and serves an excellent brandy and robust camel stew. The village is defended by 12 men-at-arms in chainmail carrying leaden clubs and darts. The villagers have 300 gp worth of diamonds and mining tools, and keep trained crysmals that they use to find new veins of diamond.

Cave lair of 200 gnolls with a chief called Gronk and 20 sub-chiefs. The gnolls carry battered shields, barbed spears and short bows. They worship an idol of Demogorgon and have a high priestess called Zima. The gnolls have a cursed crystal ball they stole from a traveling magician and know about the secret entrance to the Dungeon of Doom [Hex No.]. The gnolls are allied with the ogres in [Hex No.].

Monastery of Mercurius, the God of Merchants and Travelers. It houses 20 acolytes and adepts and its abbot is Father Frink. The abbey is constructed of purple stone and has numerous towers topped by conical, silver roofs. Its sits on a hill covered with sunflowers and badger burrows. The monastery has a vault containing the shin-bone of St. Blabus which, if kissed, cures disease about 2 out of 6 times (if it doesn’t work, its assumed you’re a creep and you’re beaten soundly and sent on your way). The monastery’s village consists of blah blah blah.

A magical spear is lodged in a crooked oak tree here. The spear has a red shaft and a bronze head and answers to the name ‘Longfellow’. It hums in the presence of warriors with more skill than its owner, and will do its best to get its owner killed so that the more powerful warrior can claim it.

Pre-generated Characters
• Six (or more?) pre-gens that can be used as a rival party or whatever; use any new races/humanoids unique to the area and classes that mesh with the area, should reflect the region; no levels so they can be scaled as a Referee needs them to be for his game.