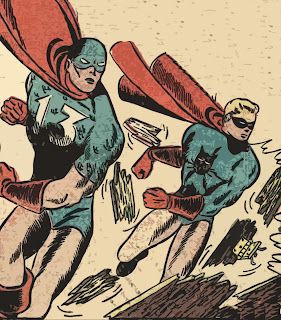 So you’ve spent your hard-earned dollars (or euros or pounds or yen, etc) on your favorite fantasy system and now your gaming group has developed a desire for some two-fisted, capes and cowls, super powered gaming. Option one is to spend some more cash on a new set of rules. Option two – we’ll call it the re-use/recycle option – is to turn your fantasy game into a super-powers game. Thanks to the concept of magic spells, most of what you need to duplicate super-powered crusaders is already present in your fantasy rules. All you really need are a few guidelines and house rules to make it work. The following article aims to fill that bill.

Ability Scores
The traditional 3 to 18 range of six ability scores works fine for a super-powered game, provided you adjust a few definitions. Where a score of 9 to 11 is usually represents average for human beings, super-beings need more room to shine. For a super-game, assume that most normal human beings have a score of 1 to 6. Scores of 7 or more represent super-human abilities. Ability score bonuses kick in at a score of 4, and improve every three points thereafter. 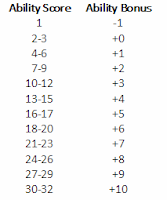 For example, a player could choose to roll 5 dice for strength, 1 dice for intelligence, 1 dice for wisdom, 3 dice for dexterity, 3 dice for constitution and 1 dice for charisma. This would, on average, give him ability scores as follows:

The set of rules you choose to convert into a super-powers game will dictate what kinds of bonuses are attached to each ability score. Since henchmen are usually only used by villains, a Referee might convert henchmen into contacts that are willing to aid a hero – the chief of police, for example, or a reporter.

Heroic Feats
Heroic feats of daring-do are part and parcel of a super-powered game, and are most easily handled by allowing basic ability score checks – i.e. roll 1d20 and aim to roll lower than the most relevant ability score, with penalties applied by the Referee based on the difficulty of the task. A character trying to leap to the top of a five story building, for example, would roll against strength.

Class and Levels
To keep things simple, all heroes in the game are treated as fighters and use the fighter’s Hit Dice, combat matrix / attack bonuses and saving throw charts / saving throw number / saving throw bonuses. If you want to get fancy and run some magic-users, go for it.

Experience Points
Heroes (and villains) are built using experience points. At the beginning of the game, the Referee (or Narrator) decides how many experience points are available to the players to spend on super-powers. Anything not spent on powers goes toward determining the character’s level.

Powers
All of the super-powers in the game are represented by spells. The number of spells, and their level and effects differ from one system to another, so different systems will produce different kinds of heroes.

Powers are purchased with experience points using the following formula:

The following table charts out the costs of super-powers. 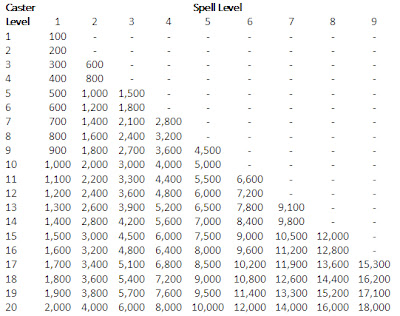 A spell’s duration translates into the duration of the power for a single fight scene. Outside of a fight, powers are usable at will, and thus have no functional limit to their duration. Spells like Haste are assumed to only work on the hero with the power, rather than being something the hero can “cast” on others. If a player wants such a power to work on others, the experience point cost is doubled.

It is up to a player to describe how his powers operate (i.e. are they magical powers, functions of high-tech battle armor, aspects of alien physiology).

Because low level characters gain levels more quickly than high level characters, it would be possible, using these rules as written, for a new character to load up on super-powers, come in at a low level, and then quickly catch up to players who opted to take more levels and fewer powers. For this reason, a -10% penalty is applied to earned experience points for every 3,000 XP spent on super-powers at character creation.

Sample Character Creation: Minerva
We’ll pretend that Minerva is a new character being created for a game, and that her player’s referee has decided that players may spend 15,000 XP on character creation.

Minerva’s player now looks at super-powers. He decides that Minerva is going to be a pretty standard Golden Age hero, and selects the following powers (using the SRD for reference):

Bull’s Strength allows her to boost her strength by +4 for 3 minutes. Stoneskin will allow her to absorb 100 points of damage before the power stops working.

Minerva’s player now has 5,900 experience points left to figure out her character’s level. For most old school games, this would translate into a 3rd level fighter. Thus, Minerva will have the attack bonuses, Hit Dice and saving throws of a 3rd level fighter, along with the power to fly, move at high speed, bonuses to strength, fighting ability and resistant to most damage. All in all, a pretty powerful woman.

Fatal Flaws and Weaknesses
Every character, hero or villain, should have a specific weakness or flaw that will be their doom if discovered. This is kept secret, even from the Referee, but should be something that can be discovered. Wide latitude is allowed here, and players and the Referee must be able to trust one another to come up with a valid weakness.

Equipment
For simplicity’s sake, translate gold pieces into dollars and don’t worry about the realism of the prices involved. Mystery men don’t spend much time in comic books shopping. The following game stats can be used for modern pieces of equipment.

Pistol: One attack per round, 1d10 damage.

Rifle: One attack per round, 2d6 damage.

Laser Weapons: As the firearms above, but +1d6 damage.

Vehicles: Treat vehicles as monsters under the control of their driver.