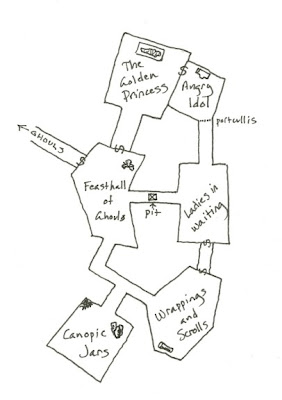 The penultimate preview of Ibis - one more to go and then I get into Mystery Men, The Gods of the Motherlands and Western Venatia, a land of blue-blooded knights, black-hearted robbers and silver-tongued merchants.

37. Three Cockles: This restaurant, owned by an émigré from Nomo named Malvina (3 hp), is under a bright blue sign decorated with three large cockle shells. The restaurant caters to expatriates from Nomo and the other city-states of Umbriago. They are an unruly and dangerous bunch, but the restaurant is usually full of laughter and singing with only the occasional duel. Duels in Malvina’s are done in a painted ring. Combatants are tied left wrist to right wrist, and engage in pummeling and wrestling until one person submits or is unconscious. Wagers fly all about the room during these bouts, and both winner and loser are treated to a steaming plate of food and a mug of wheat bock.

When one enters the Three Cockles, their eyes are immediately drawn to a number of large, steaming cauldrons in the center of the room. These cauldrons contain all the fruits of the sea – cockles, salty sea slugs, clams, oysters, fish (in a stew with saffron, scallions and dark wine), crayfish, squid and octopus tentacles, etc. A pot of garum is on every table.

The owner of the establishment, Malvina, is a youthful woman with a hard face and eyes that look right into a person’s soul. She has tawny blond hair, usually pulled back in a bun, dark brown eyes and is quite tall for an Umbriagan woman. Malvina is a divorcee, having once been married to a minor magus of Ibis; she now carries a chip on her shoulder toward all magicians, students and intellectuals.

Besides her waiters and cooks, Malvina also “employs” a band of pikeys (gypsy halflings) who skulk about the room picking pockets and doing odd jobs. The halflings live in the cellar in squalid conditions, and have been forced to serve Malvina because she holds their grandmother, a fortune teller, captive in her chambers above the restaurant. They are always under Malvina’s watchful eye, and she also has a bull mastiff on guard in her room. The halflings are beaten savagely by Malvina if they are caught plying their trade, but always wind up back in the restaurant when things cool off a bit.

39. Goldsmithy: Svalgault (gnome, 1 hp) runs a very successful shop of jewelers and goldsmiths, all of whom are gnomes. The ground floor of Svalgault’s is a workshop of tiny tables and shelves and a locked, freestanding vault containing anywhere from 20 to 80 pounds of gold and silver, and maybe 1 to 10 pounds of platinum. The floor above has been extensively altered from its former state. It has been bricked in to create a system of artificial burrows for the gnomes and their little families. The top floor contains Svalgault’s palatial residence, a seraglio of clockwork doxies, expensive rugs from Ishkabibel and beaded curtains from Ophir.

The gnome jewelers specialize in astrolabes and amulets. Like svalgault, they have light brown skin, salt-and-pepper hair and blue eyes. Svalgault is possessed of an impetuous curiosity and loves to play a good prank (though he never mixes pranks with business). When challenged or contradicted, he flies into a terrible rage, and can fight as a berserker. He is a frequent guest at Malvina’s [37], and she knows well that he and his people must not be targeted by her little band of captive thieves.

41. Exotic Redsmith: Xihuitl (4 hp) is a tall, thin woman with cinnamon skin, dark brown hair, brown eyes. She is immaculate in her appearance, wearing a white tunic, leather sandals, copper jewelry (including a nose stud) and she has three black lines tattooed on her chin, running from her lips to her neck. She is an immigrant from far-away Hybresail, brought to Ibis (via Ianus and Ophir) by her husband, a roughneck sailor from Tremayne who spends most of his time at sea. Xihuitl is a kindly but jealous woman who makes a living as a redsmith (i.e. she works in copper and bronze), specializing with vats and cauldrons (she made the cauldrons in Malvina’s Three Cockles restaurant [37]).

Xihuitl has a young son, Coyotl, who is always by her side and learning her craft. He is possessed of a wondrous intellect and frightening psychic powers (treat as a level 5 psychic). Coyotl has wicked eyes, and his piercing stares have been known to unnerve even the most stouthearted barbarian.

Xihuitl’s shop is cluttered with keepsakes from her husband’s travels and with wooden idols from her native land. A seemingly harmless iron trunk in one corner is large enough to hold a person, and the interior is lined with long spikes. Xihuitl uses it for sacrifices, a handy spout siphoning the blood into a ritual bowl of jade (worth 35 gp). She makes these sacrifices infrequently, and maybe tellingly, she usually chooses sailors who remind her of her errant husband.

43. Masoleum of the Golden Princess: This building is a tall, narrow pyramid of limestone clad in white marble and topped with beaten brass (the original gold was stolen many times). Entrance is via the ghoul tunnels under the city or through a secret entrance on the southern wall that leads to a short tunnel and a sudden fall (10-ft).

The pyramid is home to a mummified princess called Hashminepsis and nicknamed the Golden Princess from her habit of bedecking herself in a ridiculous amount of gold jewelry. Her wickedness carried her into the afterlife as an avaricious, undead monster, now attended by scorpions, the ghouls of Ibis and ladies-in-waiting (wights), as well as an ill-tempered and sarcastic idol of the scorpion goddess Selchis.

45. The Lamb and Scallion: This low building is actually constructed about half above ground and half below. One enters by descending wooden stairs, and wide ledges around the exterior of the room hold low tables and woven mats for seats. The room is always stalked by the owner, Hasani (2 hp), the owner, a large, red-faced man with a bushy black beard and sunken eyes. He always wears rich clothes and a large, white turban and carries a ciphering stick (for recording one’s bill) and a large knife that he enjoys flashing in people’s faces. Naturally, Hasani is a coward at heart, and quickly backs down when challenged.
He employs several cooks who prepare rich dishes of antelope steaks, legs of mutton and goat stew, spiced with pepper, saffron and other exotic products of the far south. Pantries connected to the main room contain barrels of sweet ale, spiced wine, bottles of rum and brandy and wheels of cheese.

Hasani has five wives, all of whom work as waitresses in the restaurant and make a game of stoking their husband’s jealous disposition. He has but a single son belonging to his third wife and adopted as his own. Adom is a layabout and a wastrel who is always working a scheme to get rich. He is a fair swordsman, but shys away from adventuring.

Thanks to Tony Dowler at Year of the Dungeon for his dungeon maps, the format of which inspired my little mausoleum.
Posted by John Matthew Stater at 4:25 PM