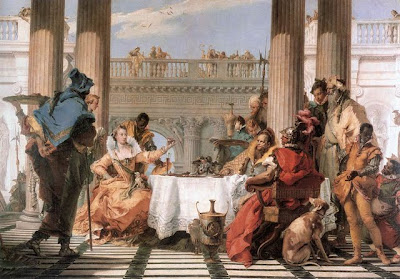 A few more streets today, and then in a few days I'll preview about half of the building locations.

D. Court of Spirits
This open yard is filled with patches of slender white mushrooms about 9-inches in height. The courtyard is not paved. In the middle there is an old, dry well (that might lead down to a dungeon, if a Referee is so inclined). The buildings that surround the yard back up to it and have any windows that might look over it boarded up or painted, except for the hostel [40].

On moonlit nights, the mushrooms awaken and become mushroom fairies that look like crude little dolls of white clay wearing mushroom caps and glowing as brightly as the moon above. These fairies will form circles and perform a very slow dance. Standing in the midst of one of these circles has a random effect:

Effect
1. In the blink of an eye, 10 years have passed. To observers, you simply blink away, but you will return to this spot 10 years of game time later unaware that you have been away.
2. You are teleported to Fairyland for 1 year and replaced by a wicked changeling. Observers will not see the switch, but may discover the change later.
3. As above, but instead of being replaced by a changeling your trip to Fairyland lasts for 10 years to you, but occurs in the blink of an eye to observers. You reappear aged a decade and with one level of druid or magic-user (or one extra level if you are already a druid or magic-user). Alternatively, a Referee may wish to play out your time in Fairyland.
4. Hypnotic patterns drive you mad unless you pass a saving throw.
5. You gain fairy sight (i.e. permanent detect invisibility), but you also see people as their inner (and often horrible) selves and lose 2 points of charisma as you find people unpleasant to deal with.
6. You are transformed into a werewolf. This will not become obvious, even to you, until the next full moon.
7. You are transformed into a mushroom-man.
8. You grow the ears and tail of an ass, effectively lowering your charisma by 1.
9. You are split into three separate beings, each with a portion of your personality and a third of your class levels.
10. You now bear an invisible fairy mark. Fairies are more friendly toward you (by fairy terms) from now on (i.e. +2 reaction adjustment).
11. You spontaneously learn a 1st level magic-user spell, but forget it and one other spell within 1d6 days. While you know the new spell you can cast it once per day. Once it and the old spell are forgotten, you will not remember ever knowing them and they will be replaced in your spell book with an unflattering sketch of your mother.
12. You think you’ve been transformed into a werewolf, and will act the part at each full moon until someone gives you a proper slap upside the head and calms you down. Nonetheless, you will go through the motions again at the next full moon.

E. Silver Lane
This narrow, noisy lane is named not only for the commerce that occurs in its confines, but also for the quartz paving stones that are streaked with silver. The bakery at the end of the street was once a noble villa, hence the higher class of paving. The buildings here rise a minimum of 10-ft and thus provide shade for most of the day. Many of them have rooftop gardens.

Crowds: The streets here are always crowded with customers, apprentices running errands and masters coming or going from lunch or home.

F. Court of Purple Dreams
The Court of Purple Dreams is dominated by a tall, pyramidal mausoleum of Princess Hashminepsis, who passed from NOD over 400 years ago (or should have). The buildings surrounding the court back onto it, and thus the court is very private and quiet. Running under its purple pavers are tunnels connecting to the sewers and allowing easy access for the ghouls of the under-city to their mistress’s tomb.

Crowds: There are no crowds in the Court of Purple Dreams, ever. Random encounters only occur here at night, and are usually with unpleasant things.

G. The University
The old University dominates the central portion of the map. Paved with aged limestone stained yellow with time, and walked with sages similarly aged, it boasts the finest library known to mankind (at least in the Motherlands and their environs).

Crowds: The University is always crowded with sages, students and apprentice magicians, as well as their servants and tradesmen who have been called on to provide some service. At night, it is more quiet due to curfews, but is still prowled by rakes, harlots and the more cunning students.

Random Encounters
1. A dozen young students trailing behind a harried scholar
2. 1d6 upper class-men and their valets
3. A magic-user and his apprentice
4. A rake coming to collect a debt owed by a student
5. Adventurers seeking a sage
6. A monster escaped from the subterranean vats