On the Gods of the Golden Sea

The native deities of the Golden Sea region are based on the mythologies of the Eastern Mediterranean, especially the Phrygians, Dacians and Thracians. Almost everything that is known of these entities comes to us from the Greeks and later Romans, and is viewed through their lens. Most of these gods and goddesses were adopted by the Greeks into their own pantheon, usually in positions that were no doubt inferior to the positions they held in the estimation of their native worshipers. Because there were many gaps in the knowledge of these divinities, I did my best to fill them in a suitably pulp-fantasy style.

Besides the deities listed here, several of the deities of the Motherlander pantheon (to be published in the near future) originated in this pantheon, including Bacchus (Dionysus), Hecate and possibly Proserpina (Persephone).

Note: The spells below, and only the spells, are designated Open Game Content. 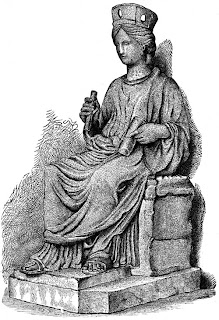 Kubeleya, also called Cybele and Rhea, is the grim goddess of the mountains and mother of the gods. She appears as a stately woman with a dour expression. She wears a long, belted dress, a high, cylindrical headdress called a polos, and a veil covering her entire body. One of her hands rests on an attendant lion while the other holds an instrument that resembles the tambourine. She is often pictured in a lion throne or a lion-drawn chariot.

Kubeleya’s consort is the demigod Attis. Attis has a bizarre origin. The demon Agdistos was a creature that was half man and half woman. It so terrified the gods that they killed it in a suitably bloody manner, and from its castrated male organ grew and almond tree. The remainder of Agdistos became Kubeleya.

One day, Nana, the daughter of the river god Sangarius, picked an almond and laid it on her breast, where it promptly disappeared and impregnated her. Nana abandoned the infant, who was raised by a he-goat in the hills and later adopted by human parents. As an adult, his beauty was godlike and attracted the attention of Kubeleya. Unfortunately, Attis had already been promised to the daughter of the local king. As the wedding songs were being sung, the jilted Kubeleya appeared in all her transcendent power, causing the wedding-goers, including Attis, to go mad and castrate themselves. Attis died, apparently of blood loss, but Kubeleya relented and resurrected him as a pine tree. This occurred on March 25, and is celebrated in the Hilaria festival, an orgiastic ceremony of wild music, drumming, dancing and drinking.

Kubeleya’s priests are called korybantes. They are male eunuchs (self-castrated, like Attis) who worship the Great Goddess in full armor with rhythmic stomping and the clashing of spear on shield.

VICTORY CHANT (Druid Level 2): The druid, by chanting and stomping, gives his allies a +1 bonus to hit and damage for as long as he keeps it up.

Adrasteia (Nemesis, Invidia, Erinys)
Also called Implacable, One from whom there is no escape
Deity of Protection and Righteousness
Wields a long sword and scourge
Served by inevitables (see NOD #3)
Symbolized by a scourge
Aligned with Law
Clerics can cast Unerring Huntress (see below)

Adrasteia is the goddess of the cosmic sea, dispenser of justice to the wicked and protector of the righteous. In some myths, she is the nursemaid to the infant Jupiter, who grants him a golden ball containing the universe as a toy. In others, she is Nemesis or Invidia, the goddess from which escape is impossible. She appears to her worshipers as a winged maiden with a face unmarred by pity. She might carry the scales of justice, or simply a sword and scourge. Adrasteia is a patron of magistrates and judges, soldiers and gladiators.

UNERRING HUNTRESS (Cleric Level 3): This spell allows the cleric to follow the path of a wanted criminal or blasphemer unerringly for a number of days equal to her level. During this time, she has no need of sleep and feels no hunger. If she has not captured or killed her quarry by the time the spell ends, she collapses into a deep slumber for a full day and cannot be roused.

Kotys appears as a woman wearing a foxskin cap and short chiton, wrapped in a leopard skin and holding a spear in one hand and a torch in the other. She has a hooded mantle on her shoulders fastened with a brooch and high, leather boots.

Kotys’ priests are called baptai due to the purification ritual they undergo to join the priesthood. They are not unlike the baccae who worship Dionysus / Bacchus.

BENIGHTED REVELRY (Cleric Level 3): This spell affects all sentient creatures within sight of the cleric who fail a saving throw. For the duration of the spell (1d6 rounds per person) they will act in one of three ways:


1 – The person enters a drunken stupor, falling over themselves and finding it impossible to do anything.


2 – The person becomes a raving lunatic, attacking whomever the cleric desires with their teeth and claws. The lunatic attacks twice per round but suffers a 2 point penalty to their Armor Class.


3 – The person acts like a love-starved satyr, attempting to grapple the nearest creature they find even remotely attractive and, well, what they do if successful depends on what kind of game you run.

Men is the so-called Lunar Bull, a deity presiding over time and the changing seasons. He appears as a rugged man with crescent horns, like those of a bull, atop his head, and sometimes with the head of a bull in the manner of the minotaur. He wears a Phrygian cap and a belted tunic, and is accompanied by white bulls and white lions.

Sabazios appears as a black-skinned rider on a white horse. He wears a himation and is depicted carrying a staff of power or a spear. Sabazios is the conqueror of the Lunar Bull and the Solar Dragon, and represents male vitality. Games are held in his honor every five years. Sabazios is believed to by the father of Dionysus. Motherlanders associate him with Pluto.

Sabazios rules the Land of the Dead, emerging with a party of cthonic fey and wraiths to conduct hunts on the nights of the new moon. On these nights, villagers stow away their animals and keep indoors, for all night they hear the baying the barghests and the blowing of spectral horns.

Sabazios’ is the patron of horsemen and his priests are all skilled at riding and mounted combat. They blacken their armor and conduct ritual sacrifices of white bulls and ritual hunts of great beasts like chimeras and manticores. Sabazios is also a psycho-pomp, and thus represents the transmigration of the soul after death. This makes him a patron of magic and magic-users. Such scholarly followers honor sabazios by tattooing their right hands with so many sigils and designs that they are nearly black.

GHASTLY STEED (Cleric Level 2): This spell summons a ghostly white steed with the stats of a warhorse with maximum hit points. The steed is tireless, and serves for a number of hours equal to the cleric’s level divided by three. The cleric can exchange one hour of the spell’s duration for one minute of etherealness, but only while mounted on the steed.

Zalmoxis appears as a handsome man, unclothed, wielding an axe or lightning bolt. He is a sky father and a deity of masculine power, a god of uncontrollable passions that are often unleashed as violence.

Zalmoxis’ most fervent worshipers believe he is the one true god who accepts their souls after death. Because they do not believe they can ever truly die, they fight as berserkers, gaining two attacks per round and suffering a 2 point penalty to their Armor Class. Zalmoxis is also skilled in the arts of incantation and singing, and thus is worshiped by bards.

Zalmoxis’ clerics wear no armor and only a small amount of clothing. They cultivate a wild, feral appearance and are permitted to wield axes and chopping blades in battle. Because they do not use armor, their Hit Dice are increased to 1d6+2 and +3 hp/level after 9th level.