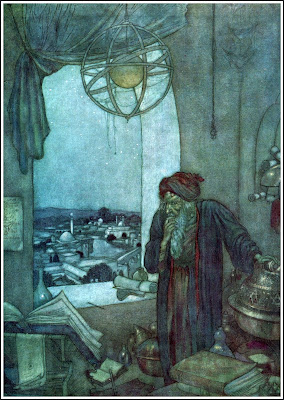 Six more locations for Ibis (use the keywords below for the other posts - they're becoming too numerous to link).

25. Coffee House: The broad, single-story building sits between the University and the Souk, and attracts a higher class of person than the Spotted Sphinx. The interior walls of the coffee house are lined with velvet couches, with a number of small, circular tables placed so that patrons have ready access to their drinks and the delicate, exotic viands served by the host. A back room serves as a kitchen and pantry, and it is here, in locked iron chests, that the precious coffee beans (worth 100 gp/lb) are kept and later ground. In the center of the main room there is a gilt, marble table holding several charcoal braziers. Bronze flagons of water are set on grates over these braziers to be heated, with the host and a number of serving boys in silk tunics pouring the water through the ground beans into silver carafes, which are then served to the customers, along with porcelain cups.

The host is named Baruuf, and he is a spindly, supplicating old gentleman of 40 winters, usually wearing an embroidered robe of damask and brocade and a neat turban pinned with a silver brooch. Baruuf works for Panth, a retired warrior and trader who established a well armed caravan to traverse the eastern Nabu to the highlands beyond, where the finest coffee is grown. Panth, nicknamed thus for his dusky skin and fighting prowess, is in the coffee house most days, conversing with clients and making deals. Although no longer the juggernaut of his youth, he is still tall and broad shouldered. He wears expensive silk robes and adorns himself with multiple pieces of gold jewelry (600 gp worth, at minimum), and always keeps his falchion (treat as battle axe) under his robes. He keeps his pet fox on a chain nearby.

A carafe of coffee costs 10 gp, and one can order light fare of an exotic nature to go with their coffee – a typical bill runs 50 gp.

27. Temple of Isis: This four-story structure has a commanding view of the Souk and the Road of Kings. The building is constructed of marble-clad limestone, and is topped with a brazen dome and a spire in the shape of an angel. One enters the building through a door of white wood hammered with golden nails. Inside the door is the main hall of the goddess. The main hall is 35-ft from marble floor to ceiling and contains a chryselephantine idol of Isis and numerous columns covered in the strange pictoglyphs of ancient Nabu. The northern wall of the main hall contains an entrance to the inner temple and three balconies overlooking the hall. These balconies are each a series of arches and can be accessed by a locked door.
Beyond the main hall are a number of vestibules and concealed staircases that lead into four floors of living quarters for priestesses, storage rooms, meditation areas, a hospital floor and offices. Amazon guards are posted inside the entry door and at the top of each staircase, and males are not permitted into these areas unless they are accompanied by a priestess, for the temple is overseen by a sisterhood of devout nuns.

Beyond the living quarters lies the inner sanctum of the temple, with a smaller idol of Isis enthroned and holding the infant Harpocrates. This statue is carved from marble and clad in gold leaf (worth 5,000 gp). Beneath the inner sanctum, accessible via secret trapdoor, are two levels of catacombs and tombs in which are interred former nuns and priestesses, as well as a former princess of the old royal house in a secret vault. Another secret vault in the catacombs holds the temple’s treasure: 2,100 cp, 730 ep, 1,100 gp, a brass coronet worth 175 gp and a chalcedony worth 1,250 gp.

The high priestess of the temple is Manesha, an older woman with olive skin, silver hair and soft, hazel eyes. Manesha is very short and thin, and wears silk gowns of the ancient style underneath more conservative blue robes of office. She is usually adorned in a wide necklace of gold and sapphires (500 gp) and ivory bangles on both arms (100 gp total). Twenty nuns dwell in the temple and tend to sick and infirm women and children. Some wander the streets collecting alms for the poor and sick.

29. Lecture Hall: The main lecture hall of the University is a three-story structure, with each level ringed by an arched portico. Within the portico are dozens of plain rooms containing a dias for a speaker and benches or chairs for students. The uppermost level contains rooms for the ten scholars on the faculty and a large room, library and laboratory for the headmaster, the archimage Randac (a notorious libertine in his youth made honorable by age and infirmity). The faculty and their specialties are as follows: Anioth (law), Haluim (arithmetic), Minia (geometry), Falanes (medicine), Shakir (astronomy), Amsi (music theory), Thema (grammar), Nekhbet (logic), Zalika (theology) and Astarte (rhetoric). Most of the scholars are level 3 adepts (sages), but Nekhbet is an elementalist (and a playful rival of Randac).
| Randac, Magic-User Lvl 11: HP 32; AC 9 [10]; Save 5; Special: Spells (6th). Sable robes of office, a golden amulet bearing the all-seeing eye (symbol of the university), a slim wand of cherrywood tipped in gold and a silver dagger.

| Nekhbet, Elementalist Lvl 5: HP 10; AC 9 [10]; Save 11; Special: Command elementals (see NOD #3 or treat her as a magic-user with many elemental spells). Black robes, a silver amulet bearing the all-seeing eye, the tools of an elementalist (usually carries an athame and goblet).

31. The Bearded Beauty: The Bearded Beauty is a social club of magic-users, illusionists and elementalists. The exterior walls (mud brick) are painted with the picto-glyphs of ancient Nabu, with the most prominent image being a beautiful queen wearing a false beard.
The club is two-stories tall, with the upper story containing the infamous “chamber of doors” and living quarters for the club’s landlord, Butros, and his staff. The ground floor contains a spacious common room, numerous small tables, four large tables and five semi-private booths obscured by thick, velvet curtains. The room is kept fairly dark and is lit by tallow candles. The walls and ceiling are decorated with stars and crescents of sparkling, polished tin.

Butros is a young man, a former student of Randac [29] with a young, pretty wife named Tabia who has recently been replaced by a succubus. Butros has bronze skin, sandy brown hair. He is a nervous chap, but very courteous and does his best to keep his clientelle happy. Besides three serving wenches, Butros employs a man named Karmaz-Kan. Karmaz wears a simple leather harness and loincloth and has deep, crimson skin and a mane of shining black hair. He came through one of the doors in the “chamber of doors” and found work here as a bouncer after he adjusted to the heavier gravity.

The aforementioned chamber of doors is located on the second floor in the center of the building. It can be accessed by a single door of golden wood that moves around a bit. Inside the room there are a dozen doors, incuding two flanking the entry door but not apparent from outside the room. Each of these doors leads to another place or dimension based upon the position of the stars. The ceiling of the room is glass, and there is a broze astrolabe in the center of the room to make last minute observations possible.

33. Akiiki the Bricklayer: Akiiki is a mature man, short and wiry with skin baked into a deep, leathery brown. Akiiki has a fear of beautiful women and married a plain woman named Jendayi (an excellent weaver) and has four children. He shares his 4-story home with boarders and his aging parents. Akiiki is an excellent bricklayer and owns two brick-making operations located just outside Ibis. Despite his success and his family, whom he loves dearly, he remains a bitter man who dreamed of grand adventures in his youth.
35. The Academy: The academy is a fighting school run by Bovis, a young-looking man with alabaster skin, pale blond hair and blue-green eyes. Bovis is a swords-man of considerable skill, and considers himself an artist. As such, he is rather bohemian – unkempt, broody and chaotic. He is a frequent visitor to the coffee house [25]. The academy is a two-story building with a training hall on the bottom floor and living quarters above.
| Bovis, Fighting-Man Lvl 4: HP 29; AC 7 [12]; Save 13; Leather jack, long sword, dagger.