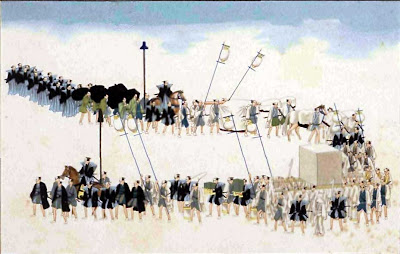 In the past, I have generally grabbed several encounters and posted them on the blog as a preview/freebie of my latest Nod sandbox. This time around, I'm going to use the 1 in 6 rule. Currently, I'm writing a few different supplements - Tome of Horrors Complete, Mu-Pan Hex-Crawl and Mystery Men! To keep up with them, I figure out in advance how many total "encounters" I need to write, figure out when I want to be done and then divide to figure out how many encounters a day I need to write. The key, of course, is to sit down and write every single day, even when you don't want to.

For example, if I do about 4.5 monster conversions/encounters a day for Tome of Horrors Complete, I can finish the book by the end of March. In fact, I'm doing 6 a day to stay ahead of the game. Likewise, I'm trying to do about 6 encounters a day for Mu-Pan. My plan is to pick one encounter each day (rolled randomly, of course) and post it on the blog. For Mystery Men's Shore City, I've actually been doing next to nothing - still need to draw the official map and figure out how to do a city-crawl. I think I'm going to do it block x block, classify the blocks as "downtown", "industrial", "suburban", "waterfront" and then include some general urbo-morphs for the different types of cityscape. When I do it that process up and running, it will work on the same principle.

0113. Situated high in the mountains there is a small village of barbaric hunters. The village consists of about 20 wattle-and-daub houses surrounded by a palisade. The village is constructed on a wide shelf of black stone situated beneath a snow-capped peak. Due to the possibility of avalanches, and the necessities of hunting, the people of the village have learned never to raise their voices.

The barbarians of the village dress in shaggy, white coats and wear fur-lined boots. They have buff-colored skin and coarse black hair. The 60 hunters of the tribe paint their faced and knuckles with viridian paint. They are known for their brawn (+1 to hit and damage) and ability to move silently (they surprise in a roll of 1-2 on 1d6). The hunters carry bunches of six javelins and obsidian knives. They are commanded by a powerful chief called Narikit.

The tribe's treasure consists of 900 gp worth of animal pelts.

Oh, and I think I've named my rivers:

The language is imaginary - actually I use the language mixer at Chaotic Shiny (my favorite random generator site, if it must be known) using "melodic 1" and then altering things as I see fit.
Posted by John Matthew Stater at 1:30 PM