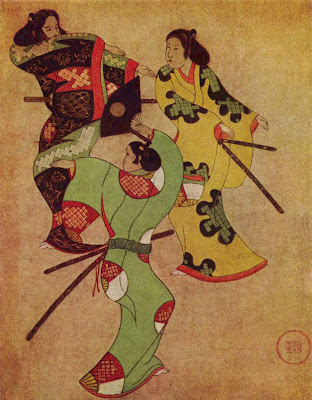 1409. The city-state of Zi'asssazus is home to the sparkling court of pious Prince Zilewei, a sagacious enchanter who commands two companies of warriors (one of archers, the other of light infantry). The town is defended by four tall watchtowers.

The city-state has aging walls covered in many coats of whitewash. A visitor can tell that Zi'asssazus is constructed on the disintegrating corpse of an older city. In fact, it was once the site of an ophidian city-state. The shamshir do not have the architectural ability of their forebears, so their wattle and daub patches and additions to the ancient buildings are noticeably more crude.

Zilewei's palace is a modest castle of somber hues and noble, stuffy guards swathed in silks and carrying two nagamaki and a brace of five shuriken. The palace contains a shrine dedicated to Nassi'a, the Moth Goddess. The walls of the shrine are hung with dozens of bronze moths with lacquered wings. It is staffed at all times by a sacred drummer who maintains a steady rhythm.

The palace is constructed at the top of a wooded hill. Two ancient stone reservoirs are located beneath the palace, and the rest of the city-state below them. Gravity brings water from the reservoirs through clay pipes to intricately carved and ancient fountains. The fountains' spouts are bronze cobras. The city-state is known for its moneychangers (scrupulously honest, with very safe vaults), its guides (many of them former soldiers) and its unique taverns. The shamshir combine their taverns with their baths. The shamshir of both sexes luxuriate on heated slabs in the steam, sipping tea or quaffing heady liqueurs from silver flutes. The people enjoy cockfighting, which they do in the alleys off the main streets, with betting a must.

The land around Zi'asssazus is a lightly wooded grassland surrounded by a thicker woodland inhabited by giant mantises. The farmers of the city-state raise ducks in ponds, grow hemp and rye and keep goats and cattle.