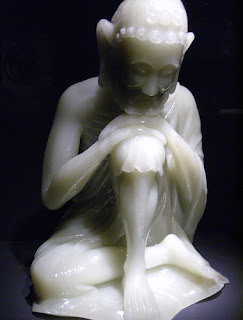 Man I love writing this stuff - just letting my mind wander, maybe feeding it with a few random seeds. Here's another one from the mountains around Tsanjan ...

0937. A small village of fishermen live in this hex in a gorge with steep, 90-foot tall sides. A river moves slowly through the hex on its way to the Tsanjani Plateau. The fishermen dwell in something that resembles a Chinese lantern composed of rattan and attached to the walls of the gorge with iron spikes. Each lantern-house measures about 6 to 9 feet in diameter and houses three or four villagers. The fishermen can be seen at odd intervals dangling their feet out their front doors casting long lines into the river below. Hatches in the tops of the lantern-houses lead to ladders composed of iron spikes, allowing the villagers to climb to other lantern-houses or to the top of the gorge.

Below the lantern-houses an idol of Yarni-Zai has been carved into the gorge wall. The grave creator of beasts and men broods over the slow river, which the villagers believe was originally a beautiful maiden that won the heart of the deity but refused him. A hermit priest sits in the lap of the graven image, meditating, answering the questions of the villagers and curing their ills as best he can. The hermit has no name, and asks nothing but an offering of rice or fish in his begging bowl.

The villagers are armed with yami and haikyu, though their lack of money keeps the bandits away and their somber attitude and resignation to the indignities of the world make them unlikely targets even for chaotic adventurers.

Image from HERE.
Posted by John Matthew Stater at 9:28 PM