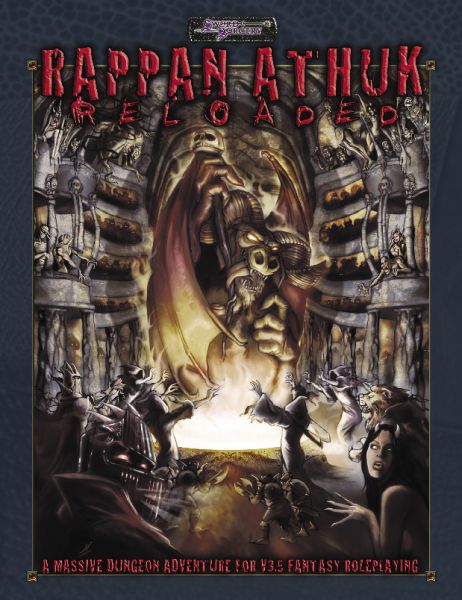 Maybe five years ago, I was getting tired of running 3rd edition D-n-D. Lots of work, that one. I was happy to have discovered a new game called Castles and Crusades and was eager to get my players into the new system. To do it, I set up a one-shot excursion into Rappan Athuk, Necromancer Games' mega-dungeon that promised an encounter with Orcus in its deepest depths.

To introduce the game in the most painless way possible, I set out to make some pre-gen characters for the group. Being a man who loves fantasy art, I started with that. Find a picture, stat it up. Stuck around 6th to 9th level, as I remember and eventually threw in some sci-fi, Popeye, etc. Gonzo.

The play concept was simple. I put about 10 character sheets on the table and let people choose their favorite. I had another 20 or so in reserve. When a character died, they disappeared and were replaced by another, rolled randomly.

Before the group had even made it into the dungeon they had a female thief torn to shreds by gargoyles. Another died in that crypt trap. Deeper in, a psion torched himself and his fellows and sent at least one character to Hades. Another guy got stuck to the ... well, I won't get too much into spoiler territory. Lots of fun, lots of casualties, no tears.

That was Rappan Athuk to me - everything the damned game is supposed to be. And now we're going to have an expanded version for Swords and Wizardry. Neat!
Posted by John Matthew Stater at 10:13 PM