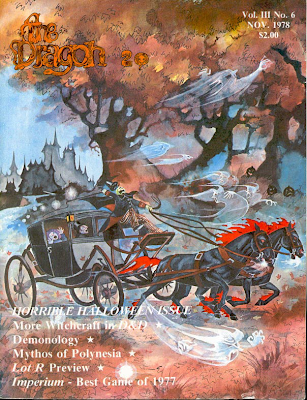 And so we come to November of 1978, which is notable ... for nothing that I'm aware of, other than this magazine. This appears to be their Halloween issue (why November? Kask explains it's because November is the dreariest month of the year - what with all the football and Thanksgiving? - and thus a good month for horror stories).

Whatever the reason, let's see what Dragon #20 has to offer.

Designer's Forum - The Making of a Winner: Imperium - Outstanding Game of 1977 by Marc Miller

Yeah, that Marc Miller. In this article, Miller describes the origins of Imperium. Apparently it began as two games, Imperium being a giant sci-fi game of economics and conquest, and StarFleet, which was on a smaller scale. Ultimately, StarFleet was put on the back burner while Traveler was made. When Lou Zocchi mentioned that the name could get them in trouble with the Star Trek folks, and when they decided Imperium was too big to publish, they decided to take what they had learned making Traveler and apply to StarFleet, which would now be renamed Imperium.

Anywho - the article goes on to describe the design process behind Imperium, and to also provide some rules clarifications and addenda. 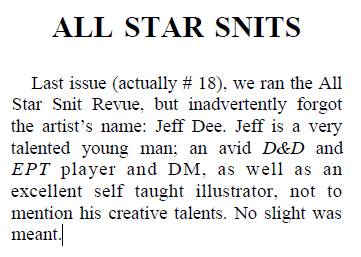 Whatever happened to that guy?

The Mythos of Polynesia in Dungeons & Dragons by Jerome Arkenberg

This article covers everyone from Tangoroa, God of the Ocean, to Pele the Destroyer, to Miru, God of the Underworld. The heroes seem more interesting ...

The Polynesian Heroes were born in non-human form, and were brought up by their maternal grandparents, from whom they derived their magic. When in human form, they could transform, stretch, or shrink themselves, fly, take giant strides, and perform great feats of strength.


Maui is, of course, the badass of the crew (and he happens to look like a buffoon with eight heads) - here are some stats for Blood & Treasure.

In this episode, Frank and Dudley abscond with one of the demon eggs to spring them on the ogres. It's amazing how engaging this strip was right from the beginning.

D&D Variant: Another Look at Witches and Witchcraft in D&D by Ronald Pehr

Editor’s Note: This seems to be a well thought out class-variant. At the very least, it makes an excellent NPC or hireling/acquaintance. For those DM’s bold enough to try it, it provides a very viable character for ladies; be they sisters, girlfriends, lady gamer or others. D&D was one of the first games to appeal to females, and I for one, find it a better game because of that fact.


It manages to be both inclusive and a bit sexist at the same time.

So, what do the ladies get with this witch? It's actually a nice class, and, I believe, the origin of the later witch class that showed up in Dragon in the 80's. Witches here are not Satanists, but more nature lovers who use magic to charm and control - I guess what you would call an enchanter in more modern versions of the game - and who can brew potions, narcotics, hallucinogens, etc. Witches get eight levels of spells, many of them new, and they appear to straddle the normal magic-user/cleric divide.

This article is all about conjuring demons (and devils). The key here is learning a demon's name, and the process is simple and clever: You research a demon or devil's true name the same way you research a spell:

Definitely one of those, "Why the heck didn't I think of that" moments.

Once you get down to the conjuration, you roll some percentile dice to see if what you call is what you get. Calling a demon prince, for example, has the following chances:

High level conjurations require assistants and sacrifices, and there are additional chances for failure for characters below 20th level. Very good article.

Gygax reviews Source of the Nile here. Apparently, this is a super long play game. It is pretty extensive review, and it looks like a pretty cool game. Best line of the review:

Be certain to read and KNOW the rules before you attempt to play. The rules are not well organized, nor are they very complete. In fact, in many ways they remind me of those originally written for D&D®.


Gygax also gives some additional ideas for the game.

The Asimov Cluster by William B. Fawcett

This article discusses the problems inherent in recreating scenes from sci-fi novels in games of Traveler. It also provides stats for the planets of the Asimov Cluster from the Foundation Trilogy. 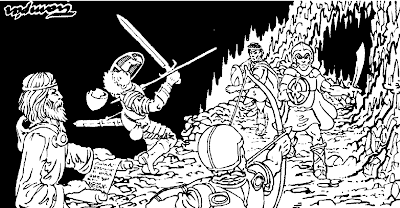 Advert for the drow modules. The drow are going to change quite a bit over the next 30 years.

Preview: The Lord of the Rings by Allen Hammack

This preview is for the Bakshi animated version (which I'll admit I like, sue me). It mostly gathers together some stills from the movie and a few production notes from Bakshi.

It's a Good Day to Die by Lyle Fitzgerald

This article compiles death statistics of a D&D campaign in Saskatoon. In two to three years, this campaign racked up 600 deaths of PCs and their advance-able hirelings. Wow! I know the old game was deadly (I've played it), but this does seem excessive. The top killers are Miscellaneous Causes (14.6 percent) and goblin races (10.1 percent). Dragons were responsible for 7.5 percent of the kills and giants 5.7 percent - respectable numbers for the big guys. War only caused 6 deaths - I guess one of the four horsemen needs to be replaced by a goblin.

War of the Ring Variant by Allen Hammack

Simple rule change - hide the movement of the fellowship so the bad guys don't have to pretend they don't know where they are. Honestly - can't believe the designers didn't think of this.

A dragon throws a stupid paladin off a cliff. Nice tactic - fake a subdual.

Demonic Possession in the Dungeon by Chas. Sagui

This article takes the rules to task on the inability of demons to possess victims. In Chas' rules, only demons of Type IV or higher can possess mortals. Interesting line:

The rule of the thumb is that only those demons that are immune to all but magical weapons and therefore exist upon two planes at once may possess.

The basic idea is that the DM let's the players all know they might be possessed. Everyone rolls a saving throw, but only one character is really the victim. The victim is chosen "randomly" - i.e. first person into a room, last person, etc. A save vs. magic is allowed to avoid the possession.

The possessed dude has his normal AC, but attacks as the possessing demon. They cannot use lawful-aligned magic weapons. The demon can use its normal powers, provided its new body doesn't preclude it. All damage is taken by the body, not the demon.

There's more, but you'll need to read the article.

Not a bad issue, really. The witch and the demon conjuration articles are my favorites. I'd recommend hunting it down.
Posted by John Matthew Stater at 8:10 PM