How Much Fight Left in the Fighter? 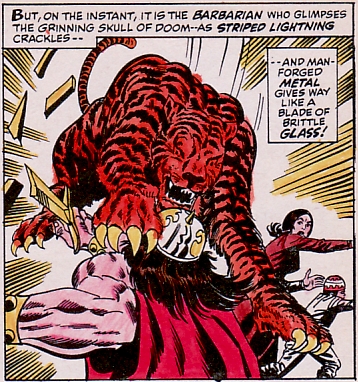 This is just a silly notion for giving players one more thing to worry about (and wager on) during a game. I won't claim is shockingly original, but it might prove enjoyable.

First and foremost, players stop tracking their hit points (or ability score points, in terms of suffering penalties and damage to them). Instead, the referee alone will know exactly how many hit points a character has left.

Now, making players go into a fight blind would be silly. After all, a person involved in a fight has at least some idea of how much fight they have left in them - how tired they're getting, how much pain they're in, etc.  But without knowing exactly how many hit points a character has left, it is harder for players to do the "bugbears deal about 4 points of damage per round, and with my platemail and shield and their 3 HD, I figure I can last 3 more rounds" calculus. This is where the wager comes into it - do I need to retreat or switch tactics, or can I outlast this bugbear bastard? Do I feel lucky? Well, do I punk?

To model the character's knowledge of how much fight they have left, the referee instead throws out descriptive language based on the total number of hit points a character has left, cross-referenced to the potential damage his or her opponent is capable of dishing out.

First and foremost, we're going to take a character's hit point total and divide it by four to produce four zones. We're going to throw some adjectives out for each of those zones to help the referee describe how a character is feeling.

One might also want to extend Zone 4 based on the total potential damage of the opponent being fought. For example, a magic-user with 6 hit points would have the following zones:

This is all well and good, but if the magic-user is fighting a monster that can do an average of 4 points of damage per round, it's likely that the magic-user will know death is just around the corner once it hits zone 3, and thus worth while using the zone 4 language a bit earlier.

The above language gives an idea of how much life the character has left in them. How about how much damage is being suffered?

In this case, we relate the damage dealt to the movement between the zones. A hit that does not drop a combatant from one zone to another is a light hit. A hit that drops a character by one or more zones is a serious hit. The following language might prove useful:

Serious Hits: A palpable hit, skewered by ..., slashed by ..., a skull-rattling blow, a crushing blow, a near-mortal blow, leaves a trail of blood running into your eye, a buffet that echoes in your head as you scramble desperately back into your stance, etc.

Obviously, this means a 10th level fighter will be suffering far more minor hits than a 1st level magic-user. Just about every hit on the 1st level magic-user will be a serious hit (if it doesn't kill him outright), which is as it should be. Those long, drawn-out sword duels seen in movies, as unrealistic as they are, are usually fought between mid- to high-level fighters (to use the parlance of D&D), not low-level types always on the edge of expiration.

So, let's imagine a 3rd level fighter with 14 hit points fighting a bugbear.

The fighter's zones are as follows:

In round one, the bugbear scores a point of damage on the fighter. The referee describes it thus: "You feel the monster's morningstar whoosh past your head, but successfully dodge the blow. You feel confident you can best this foul monster."

In round two, the bugbear scores no damage, and the referee says, "You repel the monster's clumsy blows with ease, springing back and forth with vigor."

In round three, the bugbear scores a big 5 points of damage, knocking the fighter's hit point total down to 8 and into Zone 2. The referee now says, "Damn - a palpable blow from the bugbear, it's morningstar slamming into your armored shoulder. You grimace in pain from the blow, and you can feel sweat beading on your forehead."

The player should now be cognizant that the combat has shifted a bit.

In round four, another 3 points of damage are suffered, and the referee says, "The morningstar crashes into your helmet, blurring your vision for a moment and rattling your teeth. Your mouth is dry and your muscles complain at this workout."

If the next blow takes the fighter down to 1 hit point, the referee might say, "Another crushing blow leaves a stream of blood running down your arm, weakening your grip on your sword. You feel the icy breath of death on your neck!"
Posted by John Matthew Stater at 1:38 PM