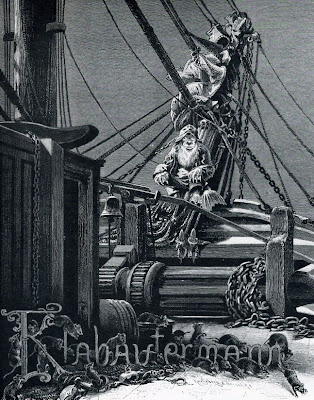 European folklore holds a candle to none in the breadth and depth of its imagination. Europeans populated not only their own countries with all manner of strange beasts and monsters, but extended their imaginations over the entire globe. While a good many of these creatures have been given game statistics, several have not. Some of these creatures are, to be sure, simple variations on existing monsters – ogres, giants, fairies, spirits, etc. Others are just not threatening or interesting enough to demand statistics. Those monsters of the folklore of France, Germany and the Low Countries, and those of medieval bestiaries and heraldry, that I thought both unique and challenging are presented below.

Ghouls
The nachzehrer, or “afterwords devourer”, is a foul undead creature from German folklore. Usually the risen corpse of a victim of suicide or disease, the nachzehrer consumes dead bodies in the manner of a ghoul. The creature assumes the shape of a large pig after leaving its grave, and initially targets its own family for consumption.

Gnolls
Through one means or another, the gnoll of modern fantasy games has come to be represented as a humanoid with the head of a hyena. In medieval bestiaries, two creatures can be used as variant gnolls. The first is the chromandi, a hairy, savage humanoid with the teeth of dogs. The second is the cynocephalus, Latin for “dog-head”. These dog-headed creatures were long claimed to have hailed from the mountains India. The dog-heads were hunters who communicated with barking and wore animal skins. Although of ancient Greek origin, they persisted into the Middle Ages. Saint Christoper was often depicted as being a cynocephalus, for he was a member of the tribe of Marmaritae, who were believed to be large and to have the heads of dogs. In game terms, Christopher would be a very rare high level lawful gnoll cleric! In the late Middle Ages, there were stories of such people living in Central Asia. King Arthur had a band in his retinue, inhabitants of the mountains of Eidyn, or Edinburgh. The Chinese admiral Hui-Sheng described an island of dog-heads, a “dog kingdom”, to the east of Fusang. Clearly, the gnolls got around in the days when giants still walked the earth.

Gorgad
Gorgades are hairy demi-humans believed to inhabit islands off the Atlantic coast of Africa. First described by Pliny the Elder, they feature in many medieval bestiaries. In Pliny’s description, it seems likely that what he was really describing was an encounter with apes. There is no reason, of course, that the gorgad cannot be portrayed in a fantasy game as a new race of hairy, primitive humanoids. After all, one can only encounter orcs and hobgoblins so many times before they yearn for something new.

Gorgades are primitive humanoids that are covered in shaggy fur. They dwell in large, extended families of 20 to 50 individuals and are usually led by one or several powerful males (2-5 Hit Dice each). Gorgades use primitive weapons, usually clubs and stones. They are known to be fleet of foot.

Gulon (Jerff, Vielfras)
The gulon appears to be a large, brown, shaggy wolf with the head of a wild cat and the tail of a fox. The gulon kills quickly and then gorges itself on its prey, eating rapidly and until swollen. A frenzied gulon can devour most of a man-sized corpse in three rounds. Once gorged, its movement is reduced to 6, it suffers a -2 penalty to hit, and its Armor Class is reduced by 2 points. A creature devoured by a gulon cannot be raised from the dead or resurrected, but can be brought back to life with a wish.

Humans & Demi-Humans
Pliny the Elder described many strange humanoids who can statistically be represented as bandits or men-at-arms. The hippopodes, or “horse-feet”, were a tribe of humans with equine feet that lived on an island with two other strange tribes. The panotti were humans with ears so large and long that they could cover the creature’s entire body. The other tribe was the oeonae, humans who only ate oats and marsh bird eggs (but not the eggs of the barnacle goose, for that creature does not lay eggs!) The struthopodes are a tribe of humans in which the male has very large feet and the female very tiny feet. The machlyes are a race of hermaphroditic humanoids that look generally like human beings with male and female halves.

Ichneumon (Echinomon)
The ichneumon was believed to be the enemy of dragons. When the creature spotted a dragon, it would cover itself with mud and close its nostrils with its tail in order to surprise the dragon and pounce upon it and swiftly kill it. The name was later used to designate the mongoose, legendary enemy of poisonous snakes. For our purposes, we’ll consider the ichneumon to be a giant mongoose that is incredibly swift (per the haste spell) and immune to dragon breath and poison. Against dragons and other reptiles, the ichneumon enjoys a +2 bonus to hit and damage.

Klabautermann
Klabautermann are aquatic gnomes of a kindly disposition who aid fishermen and sailors at sea. These gnomes are expert sailors and musicians. They appear to be small, gnomish sailors in yellow clothes, woollen caps and gripping a sailor’s pipe in its mouth. Unfortunately, a klabautermann is naturally invisible, and will only appear to sailors if their ship is doomed to sink. A klabautermann is skilled at the hornpipe, and can play a tune that grants the sailors of a ship a +2 bonus to hit, damage and on all saving throws.

Mandragora
A mandragora is a little doll or figurine in the shape of a beardless man. They are given to magic-users by the nether powers to act as familiars. In terms of game statistics, the mandragora can be considered a homunculus. Its possession allows a magic-user to Contact Other Plane once per week. The mandragora must be fed the blood of an innocent to keep it alive. They are immune to fire, and can actually travel back to their hellish plane of origin by entering a fire.

Matagot (Mandagot)
The matagot is an evil spirit that takes the form of a black cat, rat or fox. Matagots can bring wealth to a person, but in turn condemn their soul to torment after death. If the owner of a matagot gives it the first bite of food and drink at every meal, it is rewarded the next morning with a single gold coin. Each gold coin the person collects condemns his soul to torment for 1 year, thus making it impossible to resurrect or raise that person from the dead until his soul is freed. Moreover, the owner of a matagot suffers a -1 penalty to Armor Class and 1 extra point of damage per damage dice in combat – all the better to hasten his soul’s arrival in Hell.