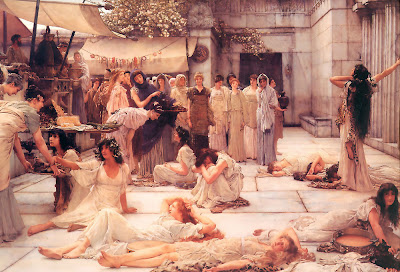 You can find Part One here - oh, and I screwed up the numbering on the map last time around, so it has been fixed. If you downloaded it before, you'll want to download it again.

May plan is to present six encounters, every other day, until I hit 60 encounters. Then I'll post the NW map and begin the process all over.

3926 Ancient Highway: Remnants of an ancient highway run through this hex. The highway was constructed along a tall ridge, and was in fact constructed by excavating and flattening a portion of the ridge. At one point, several clay drainage pipes penetrate ridge beneath the highway’s surface, allowing water to pass through and form a pleasant stream that continues down the slope before meeting a larger stream. The drainage pipes can be crawled through (or walked through if one is a halfling or gnome), being 200 yards long and eventually ending in a large, pond that fed by a dozen little streams. The pond is lined with tall trees and reeds and home to a menagerie of frogs and fish. In the midst of the stream, surrounded by water lilies, is the battered and toppled statue of a humanoid. Closer inspection reveals it to be a fairy queen. The queen is guarded by a gwurrum (or green fairy mist) that appears at night as a greenish, glowing mist on the surface of the pond. It soon moves through the pipes and into the hills beyond in search of creatures to torment and hurt. If the statue is righted and cleaned, and decorated with garlands of flowers, the statue’s mouth will open, revealing a small, flint arrowhead on the tongue. The arrowhead can be used as an arrow of slaying against fey creatures.

3928 Runic Relic: A 10 ft tall runestone carved from a greenish stone flecked with silver stands atop a grassy knoll. While the base of the hill is clogged with gnarled pine trees, the hill is completely devoid of anything but reddish-green grass. The runestone recounts the deeds of an ancient chieftain of the wose in simple (and often graphic) pictograms reminiscent of the ones used by the ancient lizard kings. The stone is erected atop the chieftain’s burial mound, the crypt chamber lying 15 feet beneath the soil. The crypt can be reached by a low tunnel composed of large stones leaning against one another and buried under the soil. The stone “walls” of the passage and crypt are covered in swirls and stylized skulls. The chieftain’s partially mummified remains lie atop a stone slab made reddish-brown from the spilling of blood (probably sacrifices). Around the slab lie the chieftain’s treasures, mostly obsidian axes and flint spear and arrow heads, but also some simple copper and electrum jewelry (25 gp worth) and a soapstone carving of what appears to be a bear standing on its hind legs (worth 10 gp).

3929 Poisonous Hollow: The landscape here turns into a deep hollow choked with maples, sycamores and ferns and traversed by a deep, moderately fast running rivulet. At many places, the rivulet becomes quite shallow and is easily forded. Many large rocks, some that bear signs of having been shaped into irregular blocks, dot the rivulet. In the center of the hex, the rivulet becomes the lair of a clutch of eight giant, green frogs that are scaled in the fashion of a dragon and that belch plumes of poisonous vapor from their wide mouths almost at random. The largest of the bunch is an actual green dragon that was polymorphed into its present form by a vengeful wizard.

3936 Abbey of St. Stimula: Atop a rocky promontory, the base of which is forested with sycamores and maples, is a large, fortified abbey. The abbey is dedicated to St. Stimula, patron saint of wine and part of the cult of Bacchus.

The abbey is built of gray stone and has gleaming white shutters on the windows. The shutters are engraved with vines and frolicking nymphs and satyrs. The buildings of the abbey have peaked roofs of green copper. The abbey is composed of a large, round tower that houses an armory, hospital and living quarters for abbey officials. It is connected to a two-story L-shaped building that houses the sisters, their winery and a shrine to St. Stimula and Bacchus. A tall wall encloses a courtyard with an iron portcullis. The courtyard houses a medicinal garden, a few young vines, a tall pomegranate tree and a very deep well. Hidden among the surrounding wooded hills are a dozens of vineyards. The vinyards are protected by a band of 12 satyrs that join the sisters in their revels each night.

Mother Isleiza is a 70-year old woman who hails from Lyonesse. Her fifteen sisters hail from the local villages as well as Lyonesse, so there is a mix of olive-skinned and dark-haired women with the long noses and narrow faces common to the coast and the rounder faced, lighter-skinned women of Lyonesse. All wear grey frocks embroidered with round badges that look like a woman’s face that is composed of grape leaves and vines. Isleiza is an ugly woman with a rude, grating personality. Of course, her looks and demeanor soften each night when the satyrs arrive and the drunken revelries begin, but in the daylight hours she is quite formidable. Mother Isleiza, despite her advanced age and seemingly tough exterior, has fallen deeply in love with Baron Torod of [4336]. The Baron and a contingent of villagers visit the abbey every year or so to pay their respects and make sacrifices, as well as to purchase the sister’s excellent wine.

The abbey treasure includes four leopard skins (15 gp each), 20,000 cp, 1,000 ep, 5,000 gp, 100 pp, a large, polished obsidian sphere (worth 95 gp) and an olivine (worth 125 gp). In a vault beneath the tower, accessible only through a secret door with a lock that appears to have a poisoned needle, but in fact channels 4 dice of lightning damage through any metallic object that enters it, is kept a powerful relic, The Hand of Sabazios.

The Hand of Sabazios is cast in bronze and is slightly larger than a human hand. When held above the head, it amplified the holder’s voice and gives his every word the power of a command (per the spell). The bearer of the hand is immune to fear and lightning and can, once per day, summon a celestial charger (treat as a benevolent version of the nightmare) that serves loyally for 1 hour.

3942 Wild Herd: A wild, unruly herd of nine hippocampi dwells on a submerged plateau. The creatures are wrangled by a trio of young storm giants on behalf of the nereid in [4041]. The storm giants, Eksen, Hraga and Tyrnach, are members of the family that dwells in [XXX] in the mountains way to the north. The storm giants live in a large cave that overlooks the fields grazed by the hippocampi. They enjoy tests of skill and strength, and will gladly challenge adventurers to compete in games. The storm giants possess 21,000 sp, 2,200 gp, 100 pp, a silver toe ring (large enough to be used as an armband, worth 1,000 gp) and a ceramic aquamanile (worth 230 gp, a memento of home). The hippocampi are all colored bluish-grey, with white manes and silvery scales.

3948 Turtle Shark: These waters, and those nearby, are the hunting ground of a massive turtle shark – possibly the largest specimen of its kind on Nod. The creature is large enough that it can batter the hulls of ships and send them to the bottom.