These are the final four playable races populating the world of PARS FORTUNA. My next task will be to preview some aspects of magic and a few of the spells. 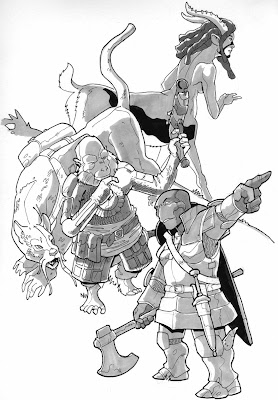 The attractive quadruped on the crest of the hill is a Skathra. The Skathra look like centaurs with the lower bodies of antelopes and spiral horns atop their heads. They have light brown skin and darker, auburn fur with black markings on their faces and sides. A skathra stands about 5 feet tall from hooves to head. They are wise, though sometimes confounding, creatures who dwell in the wild, green hills. Skathra have a natural wanderlust, and a desire to see everything there is to see before they die.

In game terms, Skathra are one of our magic-using classes. They combine their magical abilities with a talent for archery, lightning quick reflexes, survival skills and a knack for divinatory magic.

Slinking down the hill next to the Skathra is a Vindlu. Vindlu resemble long, thin lions covered in scales of silver tipped with aquamarine. They have long "whiskers" like those of a carp. These whiskers are extremely sensitive, making vindlu difficult to surprise and allowing them some insights into the emotions of others. Their four legs end in clawed hands. Outside their home city, they live in tight-knit family bands, hiring themselves out as "problem solvers".

In game terms, Vindlu are one of our skill classes. Vindlu are stalkers and pouncers, and have a talent for avoiding traps and getting into places they are not wanted.

In the middle of the group is a Tachi. The Tachi are intelligent macaques who live in lattice-work cities on the thickly forested southern coasts, west of the lands of the Cakrol (and often in competition with them). The Tachi are merchants, moneylenders and bankers extraordinaire, and are always looking for a new path to riches.

Tachi are another skill class. They can literally smell gold and silver, and couple their natural proclivity for finding treasure with a head for business and a silver tongue. Tachi make natural spokespersons for adventuring parties in PARS FORTUNA.

And so we come to the last of the races of PARS FORTUNA - the Oraenca. The Oraenca are a race of stout, heavy warriors with skin like scarlet sandpaper and bones of iron. They measure four to five feet in height and are broad and muscular. Oraenca have flat faces, golden eyes, nose holes set high in their faces and broad mouths filled with chisel-like teeth. They are egg-layers and amphibious, having evolved in a shallow sea that is now a dry, salty wasteland. Exiled from their homeland, they found a home in the Empire of Vex, and have served as the foot soldiers for that empire and its Ilel rulers, for generations.

Oraenca are the heavy warriors of the game - they can use any kind of weapon and armor, and their fighting skills are primarily defensive - they gain an increased bonus with shields and can apply that bonus to a nearby comrade. Unfortunately, they are natural followers, and suffer a penalty when saving against mind-control effects.

And there you have it, the race of PARS FORTUNA - from slightly different to what-the-heck!
Posted by John Matthew Stater at 9:24 PM