Back from Iowa and Raring to Go! 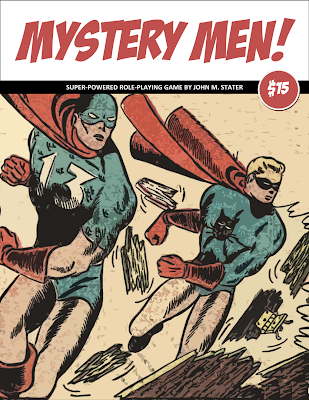 I'm back from Iowa and catching up on email and work. I have quite a few irons in the fire at the moment, so posting here might suffer a bit. Tonight, I'm going to begin posting the Gods of the Motherlands - i.e. the Greco-Roman pantheon through a medieval prism. Later this week, I'll begin posting the sandbox material for Western Venatia and, since I just got some excellent art for some PARS FORTUNA monsters, I'll post that art and a preview of those monsters' stats. Right now, I'm aiming for NOD #5 releasing in early October, PARS FORTUNA in November/December and NOD #6 in November or December. I have another little side project I'm starting as well - hopefully more on that later. In the meantime, I'm attaching my rough draft on a cover for Mystery Men! Note that the price is just a placeholder, I don't know what the price is going to be yet, and I intend the PDF to be a free download.

Oh - I'm also trying to figure out how I'm going to find time to do some playtesting for PARS FORTUNA what with all the other things I'm trying to do. Anyone who is interested in doing some playtests with their group, let me know and I'll try to work up a beta-test document with the basic rules for you to use.
Posted by John Matthew Stater at 1:02 PM