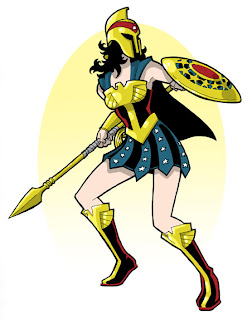 The project now has six backers, with Mike Davison of Swords of Abandon joining the project as a Golden Age patron. The project is now 57% funded with 24 days to go - if you're considering becoming a backer, check out the Kickstarter page HERE. Remember, the more money we gather, the more art we can afford and the better this project will look.

I've put some work into the alpha document, and I am now about 25% finished with character creation. I still need to do some work on the classes (adventurer, sorcerer and scientist - only minor differences between the three, mostly in how powers are purchased) and then work on all of the powers - that will likely be the lion's share of the project.

Last update, I previewed the ubermenschen who were up for a vote on who gets illustrated by our artist, Joel Carroll (that's a sample of his work in the upper right corner) and included in the book as sample heroes. This time, we'll look at the "tough guys".

Tough guys are mostly non-powered heroes who rely on their fists, guns and wits to stop crime and punish evil-doers. The category includes "dark avengers" as well as the archers that loom large in comic books even to this day. 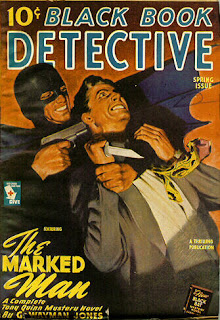 Tony Quinn was a district attorney scarred by acid thrown at him by an angry criminal. Blinded in the attack, he gets a new set of eyes in a transplant that allow him to see in the dark. A true dark avenger type, he carries twin .45s and leaves a bat-shaped scar on his victims. 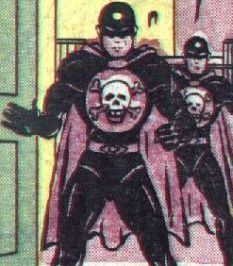 John Perry is a gossip columnist who puts on tights, cape and cowl to, surprisingly, wage war on crime. He is assisted by his ward, Chuck - AKA Kid Fury. Wonder where they got that idea? 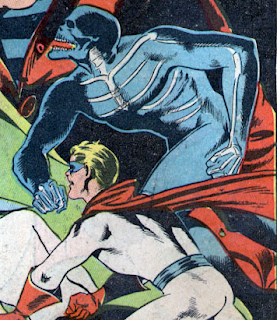 Wrestler Bob White and this teen-aged manager Terry Wake enjoy pounding criminals in their off hours. Nothing weird about that. He later got a less frightening costume - a move you just know has "angry moms" written all over it. 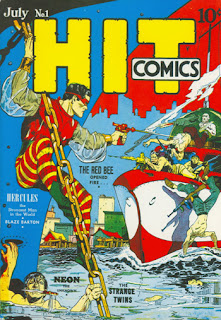 Rick Raleigh is an assistant district attorney who fights crime with athleticism, fighting skill, a keen red gun and trained bees, one of whom is named Michael. How can you not get behind a trained bee named Michael? 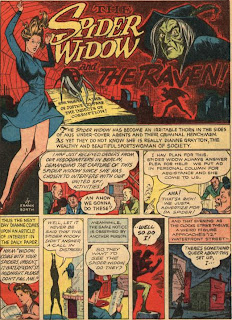 Dianne Grayton is a millionaire playgirl who dresses up like a witch to fight criminals. She has a thing for another hero called The Raven, and uses trained spiders in her crusade against villainy.

Golden Age patrons don't need to vote now - if the project gets funded I'll email you a "ballot" to handle all that.
Posted by John Matthew Stater at 10:00 AM