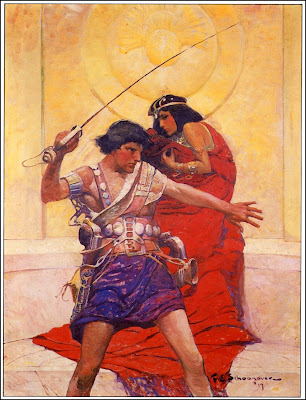 I was about 3 hours away from publishing NOD #4 today, but real life intruded so the magazine must wait until tomorrow. But it will be published tomorrow, come Hell or high water* (and I live in Las Vegas, so the former is far more likely than the latter).

- Eastern Venatia sandbox - over 200 encounters and a mini-dungeon.
- The Ruins of Timulus - an adventure for mid-level characters.
- The Pleasure Palace of Izrigul - first level of a dungeon (deeper levels will appear in future issues of NOD) intended for low-level characters.
- The Gods of the Golden Sea
- The Medieval Bestiary
- Phantastes - next installment of the classic fantasy tale wherein our hero is discovered by his shadow

Friday will see another edition of Deviant Friday Five (actually, 15 this time), and I hope to make available my outline for the Mystery Men! RPG on google docs. This is the document I will gradually turn into a game, made available as it is written to those of you who want to critique and test it. Honestly, it will probably remain an outline through September, because right now I need to put all my efforts into completing PARS FORTUNA and NOD #5. I'll probably take up Mystery Men! in a big way in October and November, and hope to have something publishable by early 2011. I also aim to get one more issue of NOD published before the end of the year, and then go to a bi-monthly publishing schedule in 2011.

I'll be in the land of my ancestors (Ottumwa, IA) this weekend visiting my kith and kin, so no posts until Tuesday. Have a great Labor Day weekend folks! Keep on gaming!

* Hell in Highwater would be a great name for a western rpg adventure.