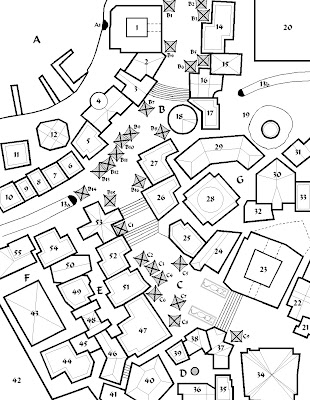 Ah - the final preview of Ibis. I have about 30 more locations to write and a few maps to draw to finish the city-state for inclusion in NOD #5, along with the second level of the dungeon that appears in NOD #4, Mines & Mining, Mystery Men!, the Illusionist class and whatever else I come up with. I'm including the map so you don't have to go looking for it in post #1.

47. Narmer’s Bakery: Narmer’s bakery is, on average, the busiest spot in the Souk from dawn to dusk. The first round loaves appear at the crack of dawn, and Narmer (5 hp) and his little legion of assistants work through the day producing bread and pastries. The building is a single-story number and constructed of adobe bricks. It has a small portico and a striped shade, under which loaves are displayed in wooden boxes. One of Narmer’s sons, a teenager named Minkah (5 hp), sells this bread to pedestrians. Inside the building the heat can be intense. Narmer has three large ovens and almost two dozen assistants. Along the northern edge of the building, by arched, barred windows, a number of tables and chairs are set up for customers. Narmer’s eldest daughter, a fifteen-year old beauty named Jenday (6 hp) who wants more than anything to study magic at the university, waits tables, servng pastries and sweet tea and searching for get-rich-quick schemes.

49. Scriptorium: Aten (3 hp), an intense academic with tanned skin, red hait and dark, brown eyes, oversees seven scribes, mostly students working their way through university or former students not capable enough to find a job in the queen’s bureaucracy. Aten is irreverent and well-spoken and is devoutly lawful. He has a wife named Tabia (4 hp) who came to Ibis after being rescued from slavery by a band of qamouli.

51. Edfu the Carver: Edfu is an aging romantic who dreams of daring adventurse in faraway lands. Unfortunately, he’s unfit, near-sighted and has just a touch of arthritis, so he settles for tales brought to him by magic-users who hire him to carve their staves and wands. Edfu is a master at his craft, and though he takes a bit longer than others, his products are always of the highest quality. On more than one occaision he has produced a wand or staff to be enchanted by a wizard, and in fact he has multiple powerful wizards in his clientele. The wizards, lawful or chaotic, like Edfu (it’s hard not to), so thieves’, assassins and even bureaucrats leave him alone.

53. The Mortuarium: This building is both a mortuary and a shrine dedicated to Anubis. It is overseen by Yafeu, a priest of Anubis, who has several embalmers under his command. The process of mummification is expensive, costing anywhere from 500 gp to 5,000 gp, and is mostly used by aristocrats and merchants.

Yafeu is also responsible for overseeing the burial of poor citizens in communal tombs outside the city-state. These structures are built of adobe brick and consist of a long tomb building atop a 6-ft tall platform. The bodies to be interred within are salted to preserve them and then place in long hollows in the floor with a few grave items. These holes are covered with heavy stone tiles, and then a new layer is added. The tombs usually top out at 20-ft in height and are hallowed to keep the ghouls at bay.

Yafeu has pale skin, blond hair pulled back in a tail and brown eyes. He has a “dusty” appearance, like an old bottle of wine, though his exact age is indeterminate.

55. Shashi the Leatherworker: Shashi is a young woman who hails from Kirikersa, the great port city of Lemuria. She has ebony skin, black hair worn in beads, bright and green eyes. Shashi is tall and fat, and keeps five husbands and six children in her home in the suburbs of Ibis. This building is her workshop, where she employs an apprentice (her daughter Sumati) and a local journeyman named Hamut. Shashi is a quick-witted prankster who specializes in crafting fine leather armor and saddles, leaving lesser items to her helpers. She is lawful and gives potential customers a good looking over to make sure they are not thieves.
Posted by John Matthew Stater at 8:16 PM